Ellie Carpenter has embraced the heightened expectations around the Matildas, declaring the team’s ambition to not only win the Asian Cup for the first time in over a decade but keep clean sheets while doing it.

Carpenter and her teammates are preparing to fly to India on Monday, having spent the last week in a pre-tournament camp in Dubai where coach Tony Gustavsson has been putting the final touches on their preparations. 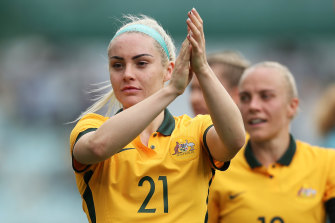 Gustavsson endured a rollercoaster first year in the job in 2021 – while he guided Australia to their best finish at the Olympics, the team won only three of 16 games, and held their opponents scoreless just twice.

The Asian Cup, which starts for Australia on Friday night (Sydney time) against Indonesia looms as a pivotal moment for the Swede.

The Matildas have won it only once before, in 2010, and anything short of an appearance in the final on February 6 in Navi Mumbai would rightly be considered a failure, which could have consequences for his tenure in the job despite strong ongoing support from Football Australia.

Carpenter, who was part of the team that lost the 2010 final to Japan under then-boss Alen Stajcic, said the team was aiming high.

“We haven’t won it since 2010, the Asian Cup, and I think all of us girls know that we need to win this. We know that we can if we play our best football and bring what we brought during the Olympics to every game here,” she said. 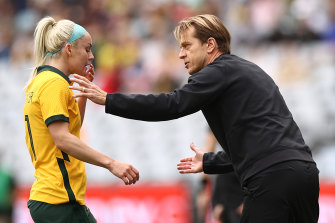 “We want to bring that trophy home.”

While the team is now in what Gustavsson calls “tournament mode”, most of the matches that triggered concern over Australia’s defence occurred in friendlies where he was experimenting with different personnel and structures in a bid to find greater squad depth.

At times, Carpenter – who plays for Olympique Lyonnais and is considered one of the world’s best fullbacks – has been played as a central defender.

“The last couple of games, we were testing out a few new players along the backline. We were testing things out, bringing some new players in, finding some depth. I think this squad for the Asian Cup is one of our strongest yet,” she said.

There are some fresh faces around the team, with inexperienced quartet Cortnee Vine, Holly McNamara, Karly Roestbakken and Winonah Heatley competing for the final two spots in Australia’s 23-strong selection for the Asian Cup.

There is also a new face on Gustavsson’s coaching staff. He has appointed compatriot Jens Fjellström, a former player-turned-pundit who has had stints as an analyst and scout with the Danish national team and Malmö FF, as an assistant.

“Bringing some new faces in like Jens, our new assistant coach, [means] some new tactics and new words there we haven’t had before. It’s a nice refresher,” Carpenter said.

“He’s very intelligent. He’s worked with a lot of world-class teams over the past few years, and he knows his stuff. He’s really good for our team, bringing that extra analytics and ways to beat teams and what makes us the best team to win.

“His insight is really important for us, especially in tournament mode – anything can happen in a tournament but if you’re prepared for pretty much everything, we’re just going to give ourselves the best shot.”