Have Arsenal got it wrong on Willock? He has scored more goals in his last three Premier League games than Xhaka, Partey, Ceballos and Elneny combined this season – but his future looks to be with Newcastle

Arsenal loanee Joe Willock appears to be finding his feet at Newcastle at just the right time in their battle to beat the drop.

After a perfect start to life at Newcastle, scoring on his debut at home to Southampton, things went all a bit too quiet for the young English midfielder.

But his recent revival may have just proved pivotal for Newcastle in their bid to retain their Premier League status, scoring two crucial goals in the space of three top-flight matches. 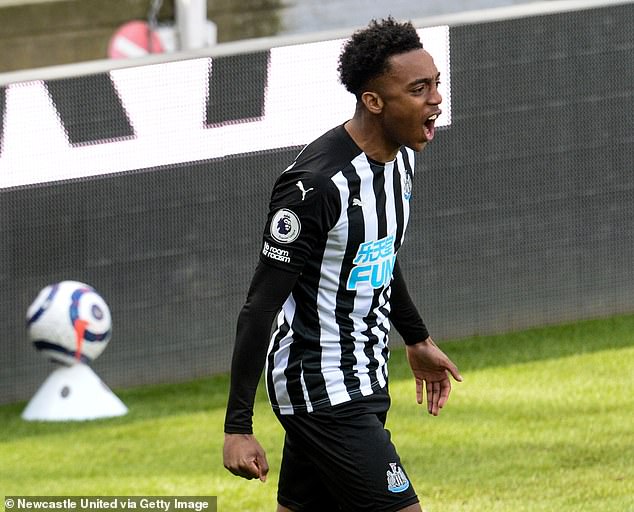 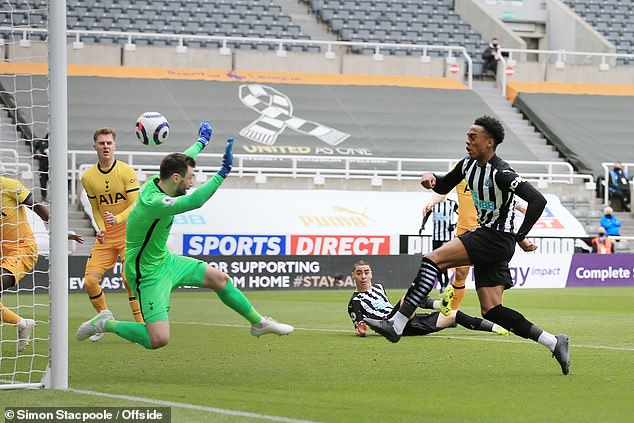 Willock delighted Arsenal fans after bagging the late equaliser for Newcastle at home to Tottenham on Easter Sunday before emphatically heading home the winner against West Ham last Saturday.

The 21-year-old’s crucial goals have ensured Newcastle are on the brink of safety – with the Magpies sitting eight points clear of the relegation zone with a match in hand over 18th-placed Fulham.

Willock’s late goalscoring heroics have left manager Steve Bruce, if he is still at the club this summer, wanting to do everything to keep him at St James’ Park.

Reports in The Telegraph on Friday claimed Newcastle are trying to get a permanent deal done this summer, but it would cost them around £20million.

Speaking ahead of Saturday’s lunchtime trip to Liverpool, Bruce said: ‘It was quite refreshing hearing him yesterday (Thursday) talking about going out and seeing the sea, driving out to the coast.

‘Living in London, I don’t think he sees that very often. I believe he is enjoying it here, he wants to be in the team, but he has scored three goals and the last two, particularly the last one were vitally important.

‘You could see by his elation that he was delighted for the team. He’s a young lad and I’d love to keep him here and we will have some big conversations with Arsenal.’

Willock has impressed enough up North in the Premier League to get Mikel Arteta thinking – was he right to ship him out on loan?

Arsenal, somewhat uncharacteristically, have struggled for goals all season in the Premier League and their faltering attack is one of the main reasons they are languishing in ninth.

The Gunners have certainly not been firing on all cylinders this season, scoring just 44 times in 32 Premier League matches. Eight teams have netted more.

But while Pierre-Emerick Aubameyang and Alexandre Lacazette have come in for criticism at times for their slump in front of goal, perhaps more worrying for Arteta is the lack of a cutting edge from behind the front line.

Alarmingly for Arteta and Arsenal is how few goals the midfield are chipping in with.

Arsenal’s central midfielders Granit Xhaka, Thomas Partey, Dani Ceballos and Mohamed Elneny have just one goal between them in the Premier League this term. 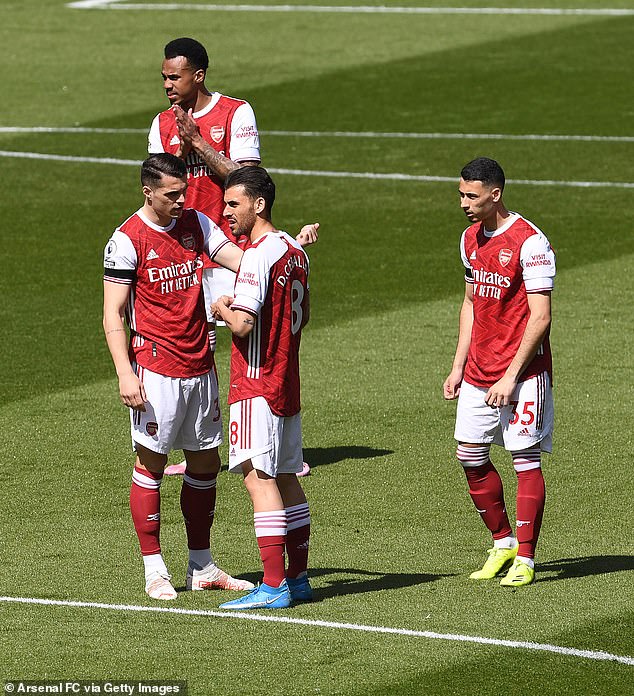 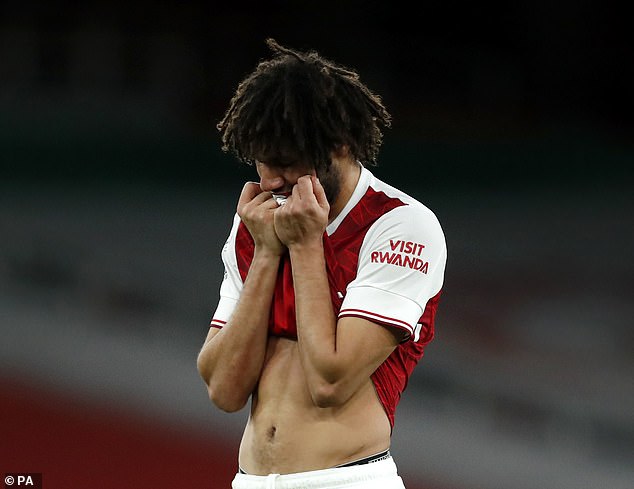 Mohamed Elneny continues to toil in midfield for Arsenal, who have endured a torrid season

And that was from a special free-kick from Xhaka in the crucial 3-1 victory over Chelsea on Boxing Day at the Emirates.

Take that goal out of the equation and the quartet have failed to score a single goal from open play in the Premier League, which simply is not good enough.

You take a look back at the glory days under Arsene Wenger, and his midfield would always chip in with crucial goals – with the likes of Patrick Vieira, Emmanuel Petit and Cesc Fabregas running the show.

Other than Partey, who it must be said should be given some slack due to his injury situation and settling-in period, Arsenal have a lack of legs in midfield.

Xhaka’s job in the Arsenal side is to help dictate the tempo of the game and break up play next to Partey, while at times it’s very hard to see what Ceballos and Elneny actually offer.

The pair provide little threat going forward from a goal-scoring point of view, while they fail to provide a shield for the defence.

While question marks remain over Willock at the Emirates, he does however give Arsenal something different, and with experience will only improve.

To many Arsenal fans, there is a glimpse of Aaron Ramsey in Willock – someone who knows where to be at just the right time in the penalty area to latch onto an inviting cross or pass. 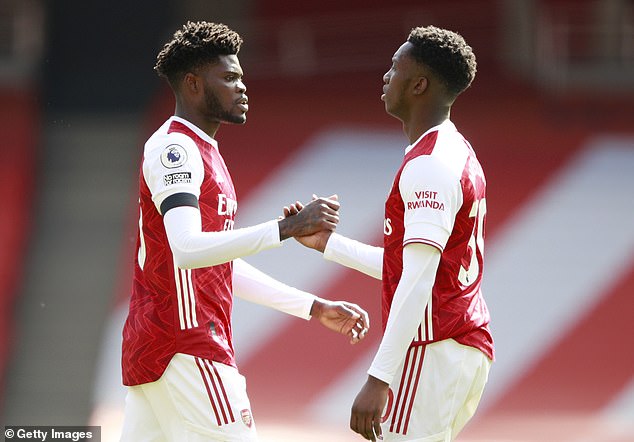 Take his goal against Tottenham a few weekends ago for example, and he was in the right place at the right moment.

After an in-swinging cross from Matt Ritchie down the left, Willock could be seen sprinting into the penalty area waiting for the knockdown.

Joelinton headed it back towards goal to Miguel Almiron whose header deflected straight into the path of the on-rushing Willock, who had the easy job of striking home past Hugo Lloris for Newcastle’s equaliser.

And against the Hammers last weekend, Willock again saw the opportunity from Ritchie’s cross down the left.

This time, Willock was directly on the receiving end of the delivery, heading powerfully home past Lukasz Fabianski, who couldn’t quite keep the ball out.

Those two goals perfectly highlight what Willock is capable of, and what in the long-run he can provide Arsenal with.

Ramsey popped up with some of Arsenal’s most vital goals in their recent history thanks to his spatial awareness and clever movement, and there remains the hope that Willock can offer this going forward.

Willock played a starring role during Arsenal’s Europa League group stage campaign thanks to his engine in midfield. But there was one caveat – the level of opposition. 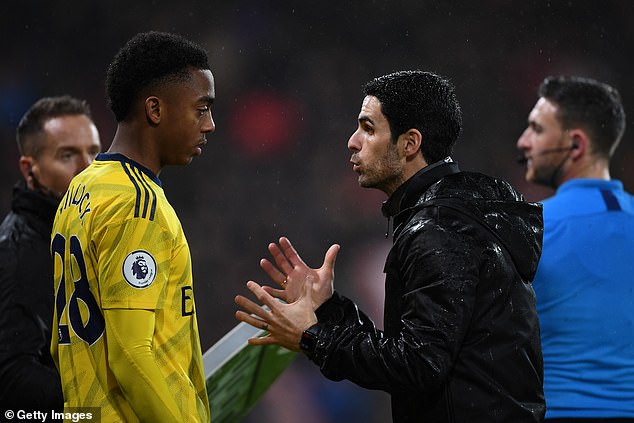 Every Arsenal player was made to look good by their recent Europa League group stage opponents – consisting of Molde, Rapid Wien and Dundalk.

Willock impressed enough during the Europa League, but when given the chance to strut his stuff on the main stage (the Premier League), he has struggled to convince.

The midfielder’s composure on the ball and decision-making under pressure against the league’s best lets him down at times, and is the main reason why Bukayo Saka and Emile Smith Rowe have burst onto the scene but he hasn’t.

So among Arsenal supporters, the jury remains out on the youngster.

The potential is definitely there, and the fact that he offers something different – a more direct style of play – does excite Arsenal fans.

However, Willock currently lacks that maturity and calmness needed to make it at Arsenal under Arteta.

Willock does deserve more time at Arsenal to prove he has what it takes, but if Arteta can seal a permanent deal for Martin Odegaard and finds more attacking threat from midfield then perhaps his career in north London will be over.

But what would be Arsenal’s loss will be Newcastle’s gain. And with the Magpies finding goals hard to come by, Willock could be just the man to help ignite their toothless attack.

Tags: Arsenal, Joe, let, to, we're, wrong':
You may also like
Latest Posts