West Ham fans have praised Jarrod Bowen’s ‘world class’ technique despite being denied of a sensational overhead kick equaliser by the crossbar as West Ham fell 2-1 to Eintracht Frankfurt.

The Hammers were trailing in stoppage time, when captain Declan Rice curled a cross into the box in desperation.

The 25-year-old attacker contorted his body to attempt an overhead kick, making a thunderous connection with the ball.

Bowen unfortunately saw his effort smack the crossbar, however, with West Ham unable to pick up the pieces. 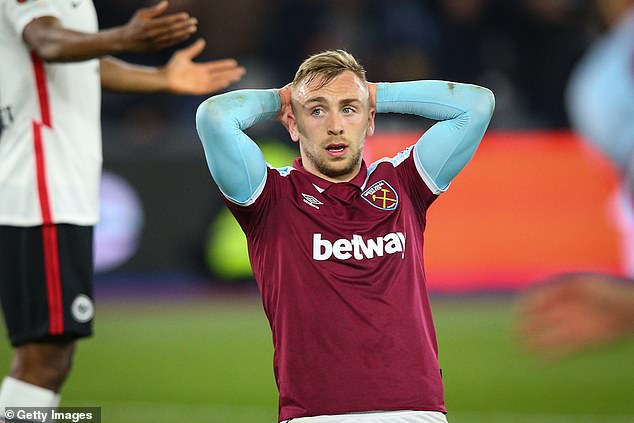 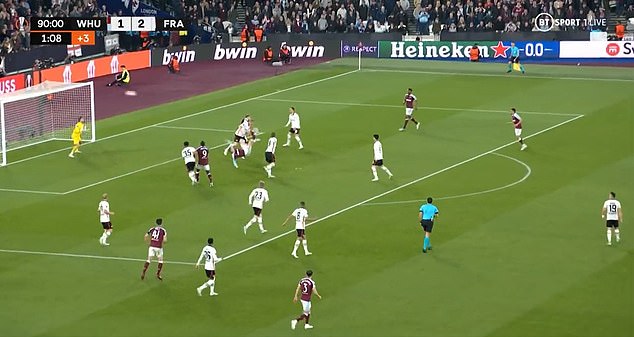 Fans couldn’t believe their eyes when Bowen produced a stunning bicycle kick that almost got them back on level terms at the London Stadium.

One fan insisted: ‘That is just ridiculous from Bowen, so unlucky.

Another said: ‘Imagine if that Jarrod Bowen effort went in. The technique and anticipation was world class. Deserved a goal based on tonight’s performance.

A third added: ‘Feel sick. That Bowen overhead kick was special. So unlucky.’ 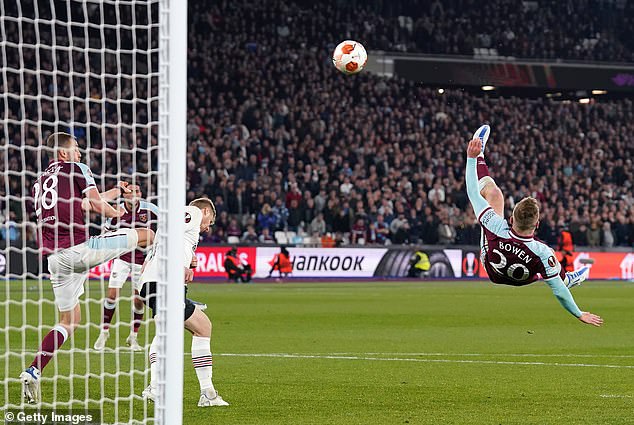 Other Hammers supporters feel haunted and sad that it didn’t go in – meaning West Ham have work to do in the second leg of the Europa League semi-final.

One said: ‘That over head kick by Bowen is gonna haunt me now.

Another stated: ‘I can’t stop watching the Bowen overhead kick I wanna cry

One simply added:’If that Bowen bicycle kick went in.’

BT Sport pundits Joe Cole and Owen Hargreaves were also claiming it would have been a stunning goal and would have made for a cracking end to the match.

Joe Cole said: ‘If that Bowen effort goes in that raises the roof.

Hargreaves responded: ‘It would have been one of the best goals you’ve ever seen.’

Bowen also had a chance early on in the match, but did not seem too concerned in his post-match interview, and insisted they remain confident.

‘I thought I had scored the first one and it hit the post and the one at the end I just thought hit it and see what happens,’ he told BT Sport.

‘Unfortunately it didn’t go in but still loads of confidence in this group. 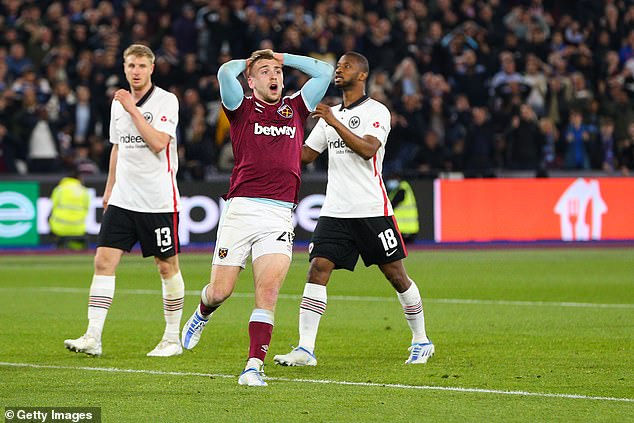