Fans have roundly criticised West Ham’s Andriy Yarmolenko for an embarrassing dive against Kidderminster Harriers in their FA Cup tie.

The Hammers snatched a victory with a last-gasp goal in extra-time stoppage time from Jarrod Bowen, with Declan Rice equalising in stoppage time after the 90 minute mark to take the game into extra time after Alex Penny’s opener.

But fans and pundits noticed Ukrainian winger Yarmolenko’s ‘shameless’ dive in a cheap attempt to win a penalty and decide the game and took to social media to blast his antics. 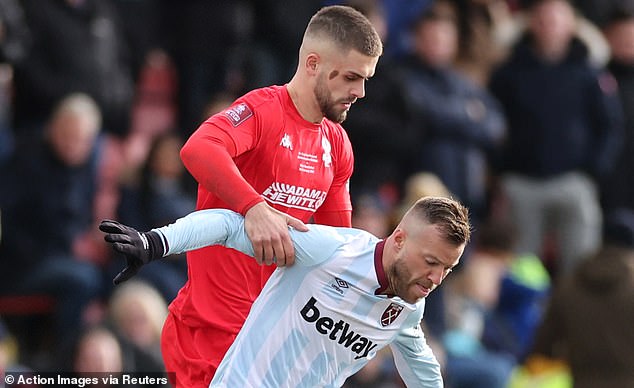 Football writer Henry Winter said: ‘Yarmolenko guilty of one of the worst pieces of simulation this season. He had a chance to shoot but dived. Against sixth-tier opposition. Shameless. Can’t believe old-school, principled Moyes would approve.’

Another fan said: ‘That is comical from Yarmolenko. A dive like that against a National League North side, the shame of it.’

One sarcastically commented: ‘Thoughts are with Yarmolenko after that horrific challenge’.

A fourth said: Yarmolenko just fell over in a 1v1 cos he couldn’t be bothered. Get this man gone.’

Another added: ‘Yarmolenko has just dived against Kidderminster Harriers.’

A sixth fan questioned why no yellow card was shown, asking: ‘Why has Yarmolenko not been booked?’