Western Sydney Wanderers have apologised for the wording on an advertisement for a singles dating night that it pointed out was "a heterosexual event".

While many young Wanderers' supporters reacted with excitement to Monday's announcement of the club's first singles night, there were also plenty of comments on social media from fans who felt the club was not being inclusive of the LGBTQI community. 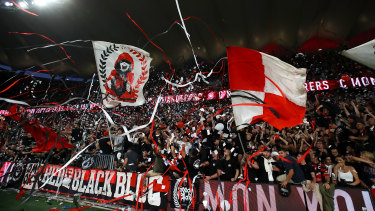 The Red and Black Bloc were criticised for a homophobic social media comment ahead of the Sydney derby.Credit:Getty Images

While the Wanderers advertisement said "everyone is welcome" to the April 4 singles night, it added in the small print "please note this is a heterosexual event".

A Wanderers spokesman said the club had specified the event was for heterosexuals to provide clarity for those who attended and said the club was open to the idea of hosting a singles night for its LGBTQI fan base.

"We apologise for the wording and it has been removed from the event details," a Wanderers spokesman said. "From our research, a singles night is often sexual-orientation based – which is a consistent theme across these type of events, and we were attempting to give our audience clarity. No-one is excluded. This is our first attempt to run an event like this at match and, if successful, we could host others in the future, including for our LGBTQI family."

Fans on social media had earlier described the event as "tone deaf" and "embarrassing", particularly due to the timing. The announcement of the Wanderers' singles night comes less than a fortnight after the club's active supporter group made a homophobic taunt in an online post before the Sydney Derby.

That Wanderers condemned the support group post, saying: "Discrimination in any form is unacceptable. We are and always will be a fully inclusive football club."

Western Sydney Wanderers are the latest organisation looking to bring customers together by hosting a dating event. Others have also taken the step of specifying whether events are open to people of all sexual orientation or only for heterosexuals.