Ryan Mason believes Tottenham are “four or five years” behind Manchester City after their Carabao Cup final defeat, but what next for Spurs and captain Harry Kane?

Kane failed to register a touch in City’s box at Wembley as Aymeric Laporte’s late header brought Pep Guardiola his 30th trophy, and City’s fourth-straight League Cup as they look to complete a treble this season.

Mason, interim manager at Spurs after Jose Mourinho’s sacking at the start of the week, says his side left everything on the pitch at Wembley, keeping City out for 82 minutes. But who should Spurs be targeting as permanent manager? And what happens if Kane leaves the club?

Jamie Redknapp, Craig Dawson and Micah Richards also had their say in the Sky Sports studio on what will be a pivotal few months for Daniel Levy and Spurs… 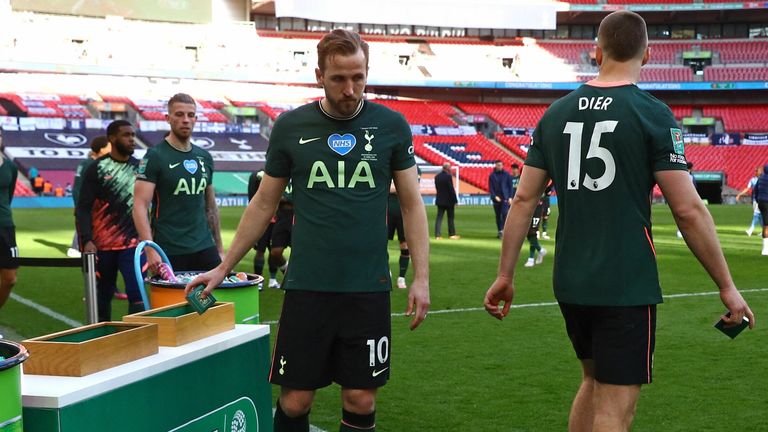 “I thought we were 100 per cent committed. They are a very good side. I thought we rode our luck at times, disappointed to concede from a set-piece, but the guys gave absolutely everything. They believed, they left everything on the pitch.

“Going forward, my idea and I’m sure everyone’s idea of Tottenham is to be brave and try and dominate games like they do. It’s a process, it takes time, I think the fact the players tried and believed. It says a lot, it makes me believe they want to work this way.

“But it’s normal, we’ve worked this way for the best part of a week, had two day to prepare for this game, and played against the best team in the country. Yes we rode our luck at times, but I thought as the game went on they were creating less. It’s difficult to take but I’m proud of the boys.”

‘Sarri? That won’t excite Spurs fans’ | ‘Give Parker a project’ 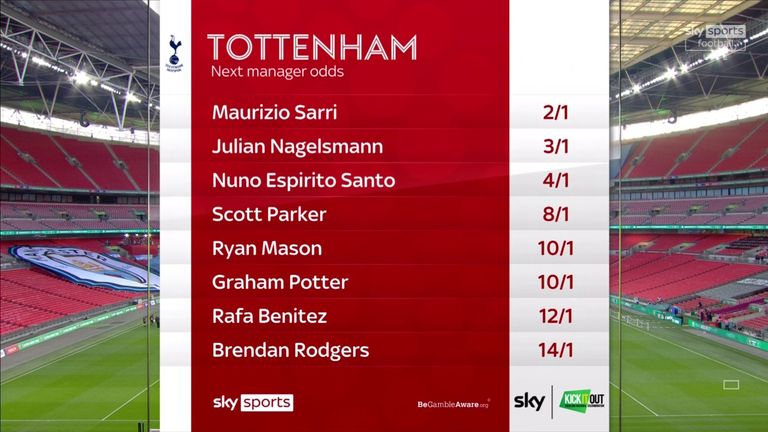 “The timing [of Mourinho’s sacking] was incredible, but it doesn’t surprise me with the club, it has happened before. They hire and fire very quickly, but they have to make sure they get the next one right. There’s a lot of pressure now on the board to get it right. It hasn’t worked out with Jose Mourinho, now the next manager has to be the right one, otherwise the pressure will really grow.

“Maurizio Sarri will not excite the Spurs fans one bit, not one bit.

“You’d imagine Julian Nagelsmann will go and take the Bayern Munich job. Nuno Espirito Santo – does that excite me? Not sure. Scott Parker looks like he might be going down with Fulham, but has history with Tottenham. Rafa Benitez? No. Brendan Rodgers, would you leave Leicester now, where you have established something?”

“I’d like to see Scott Parker get it. Have a project. They did it with Mauricio Pochettino, he cleaned a lot of people out, started afresh, and he built on that. Parker started his coaching at the club, he’s a great guy.

“Look at Pep (Guardiola) early on in the season, when Leicester beat them, they stuck with him and have gone on to be unbelievable. You’ve got to stick with them, have a project, and that’s why I think Scott Parker is the man to go in, clear everything out, and start fresh, to really back him.”

“It depends on if they keep Harry Kane or not. That will have an impact on who takes the Spurs job, if we’re being realistic. If you sold your striker, which might happen now, that will dictate who the manager will be.

“You always look at rebuilding, but if you lose your talisman, it’s a massive impact. Anyone who has tried to come in and be second choice to Harry Kane, it hasn’t worked out. That’s Spurs’ priority now, get him nailed down, and then worry about the manager afterwards.”

“Nobody would begrudge him leaving. Right now, the way it is, with the disarray of not having a manager at the club… unless Harry knows who the next manager is and they’ve got him in place, which I don’t believe would happen. Right now, these are such big, important decisions for Daniel Levy, perhaps the biggest since he’s been at the club, to get this right.

“It’s too big a club to have the situation where managers come in and out too quickly, they have to keep hold of their best players, because if they don’t, it will be a difficult time once the crowd come back in.”

“With Kane’s future, that’s going to be the big question now. Is he going to stay? We were holding onto this: can we win the cup? That’s gone now. Top four looks like it’s going to be a struggle. Can they keep hold of him? He is everything for that football club, and if you lose him, it’s a major, major asset gone.

“A major manager coming in, asking what funds they are going to have, how are they going to improve the club to get them within touching distance of the top four now that they are chasing.”

Manchester City have just three days until they travel to Paris to face PSG in the first leg of their Champions League semi-final on Wednesday night. Tottenham have a week off until they face Sheffield United next Sunday, May 2, live on Sky Sports Premier League from 7pm ahead of a 7.15pm kick-off.

Tags: and, for, Harry, Kane, next, T, What
You may also like
Latest Posts