Ibrahima Konate was sharp on his Liverpool debut and fearless Harvey Elliott looked at home in the first-team, but more is needed from quiet Takumi Minamino… after Reds’ first two quickfire pre-season friendlies in Austria, here’s what we learned

Liverpool kickstarted their pre-season preparations with two 30-minute games at their Austria training camp this evening in a bid to give their players some minutes.

The Reds played FC Wacker Innsbruck in the first fixture, followed by Stuttgart in the second, and the intensity was ramped up ahead of the new season.

Divock Origi was on target in the 1-1 draw with Innsbruck, while Sadio Mane netted the leveller against Stuttgart.

Jurgen Klopp will have been pleased after giving a large number of his players, both young and experienced, a run-out, and here is what Sportsmail learned… 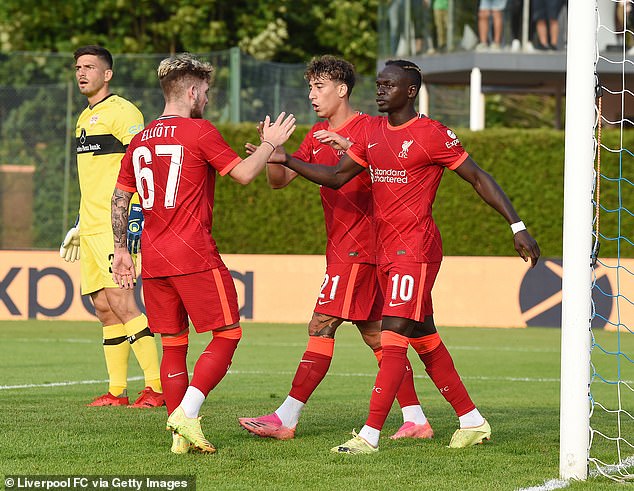 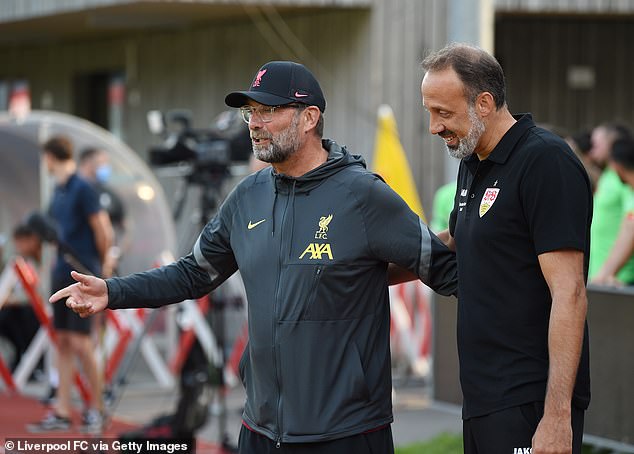 Trent Alexander-Arnold was handed the captain’s armband for this one, while the youthful line-up also included Kaide Gordon, Owen Beck and Tyler Morton.

Liverpool took the lead after a harsh penalty was given for handball, with Divock Origi firing into the bottom corner and underneath the goalkeeper.

Innsbruck went on to equalise after a deep cross was nodded down and into the bottom corner by the veteran Ronivaldo.

Beck was left isolated down the left-hand side at the back post, and the Wacker man was able to pick his spot by glancing across Loris Karius. 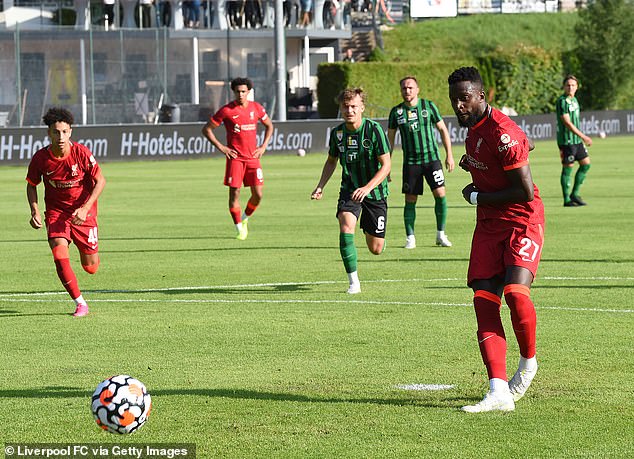 The search for intensity

Of course, the most important aspect of pre-season is ensuring that players are handed plenty of action and avoid silly injuries.

By that marker, this was a successful first game back for Liverpool, but they didn’t quite find an intensity. The game’s stop-start nature put a quick end to that.

This is more than understandable at this very early stage, however, and the usual sharpness on display from the squad will return in time for the new campaign.

Defenders given chance to shine

This was Joel Matip’s first appearance since January, and forgotten man Ben Davies’ first start overall for the club.

Both can be pleased with their performances, although the marking for Innsbruck’s goal was sloppy and will give their coach plenty of food for thought.

Matip in particular looked very composed in and out of possession, and his long-awaited return from injury will be a significant boost for the club. 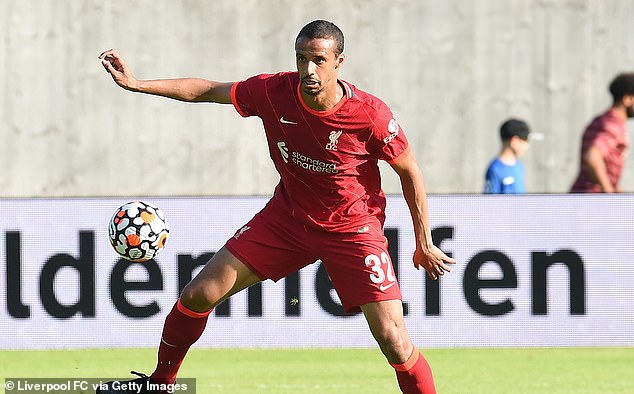 The kids are more than alright

Liverpool look as though they may have a real gem on their hands in the form of Gordon. He put in an eye-catching display in this friendly.

Gordon rifled off target after Alexander-Arnold’s corner was cleared towards him, and also forced Lukas Wedl into a sharp stop later on.

Tyler Morton looked assured too, as did Leighton Clarkson. While it is far too early to consider them first-team names, the future is certainly bright at Anfield.

Origi and Minamino under pressure

Two of the players potentially at risk of the axe this summer spearheaded Liverpool’s attack against Innsbruck and would have been hoping to make an impact.

Origi certainly did, at least on the score line. His penalty to hand the Reds the lead was well-taken, and he looked sharp when running in behind down the channels.

Minamino, on the other hand, was quiet and looks to have plenty of work to do if he is to remain in Klopp’s plans for next season. 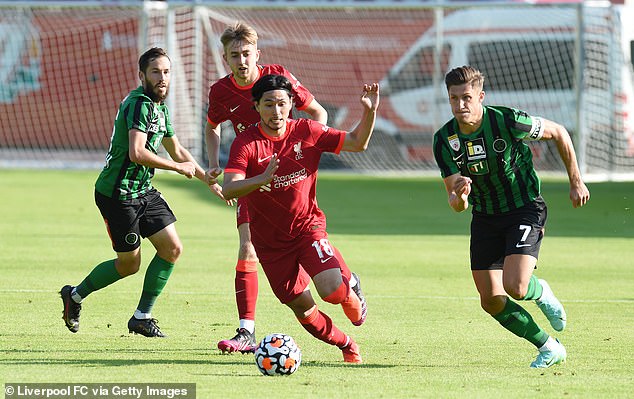 Overall, there were plenty of positives to take for Liverpool, with players returning from injury or the fringes and picking up some minutes.

This second friendly was undoubtedly a step-up in intensity and quality for Liverpool, who played out another beneficial 1-1 draw.

Stuttgart took the lead with a well-worked move, which saw the backline carved open and Phillipp Forster tapping home.

Goalkeeper Adrian was left helpless, with a neat backheel inside the box teeing up Forster to sweep coolly into the corner.

The increased tempo continued, allowing Liverpool to find a rhythm, and they went on to level the scores with a fine attack of their own.

James Milner floated an inch-perfect ball out to Kostas Tsimikas on the left, and the full back played across goal for Sadio Mane to touch in at the far post. 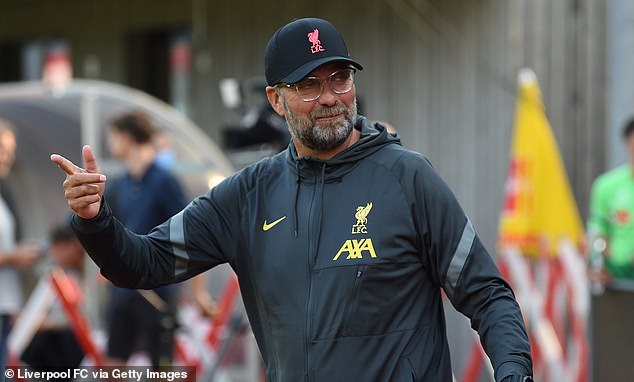 Konate composed on his debut

That was a very solid performance from Ibrahima Konate on his Liverpool bow.

He may have wanted to have been tighter to Sasa Kalajdzic in the lead-up to Stuttgart’s opener, but he certainly delivered in the high line.

With a sharp turn of pace on the recovery and excellent awareness, Konate looks right at home. He also said he was ‘very sad’ not to win, showing a good mentality.

Mane and Salah back to inject energy

It must have been a great sight for Liverpool supporters as Sadio Mane and Mohamed Salah hurtled forwards in this fixture.

With the duo in the starting line-up, the team immediately looked fresher, sharper and more creative when on the front foot.

Salah saw a shot smothered after a good move while Mane was typically busy, and both players have enjoyed well-earned time off this summer to be fit and firing. 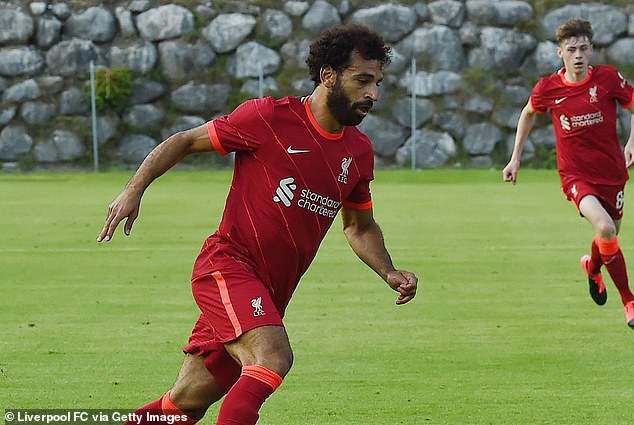 Mohamed Salah featured in the second friendly and was typically busy, but could not score

A much-needed switch up in speed

The stronger nature of Liverpool’s side against Stuttgart pointed towards an improvement in quality, and to little surprise that did happen.

Mane, Salah and Naby Keita all entered the fray, having sat out during the first game, and there was a notably better impetus from the Reds.

It may not have been a gloriously entertaining end-to-end affair, but this increase in demand on the legs of his players will have left Klopp coming away feeling pleased.

This kid is special, it’s that simple. He is confident, and his technical ability is of a brilliant quality. Elliott fits right into this first-team and doesn’t look out of place.

The potential for him to play off of, and link up with, Salah is an intriguing prospect, and Elliott justified these credentials by keeping the ball ticking over nicely.

He thrived in central midfield, and has a keen eye for a pass. With team-mates either side of him, Elliott was blessed with options and he will have impressed Klopp. 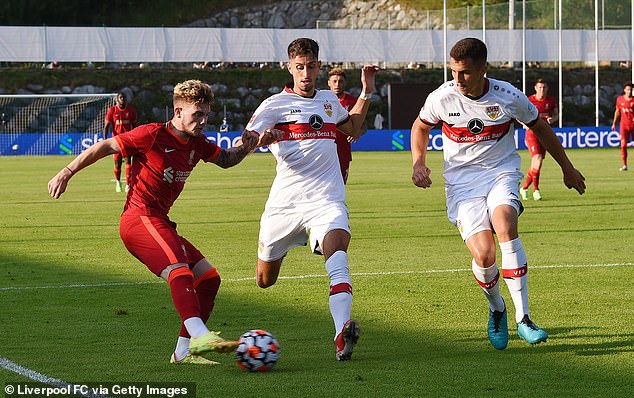 Harvey Elliott (left) looks to be a real gem and was fearless, helping him to look right at home

Tsimikas is worthy of his own shout-out after his fine performance. It is not easy for him being an understudy, but he did his chances of playing more no harm at all.

As explained, the better quality and adventure from both teams would have been very beneficial, and there were a couple of crunching tackles added into the mix too.

Once again, the result would have been the last thing on Klopp’s mind as he looks to breathe new life into his squad with next season already looming on the horizon.

Tags: From, learned, Liverpool, We, What
You may also like
Latest Posts