‘Diamond’ Dane Scarlett could be Tottenham’s brightest youth prospect in a decade… so, from the starlet hoping to fix a chaotic defence to the loan star blitzing the Championship, who are the kids Jose Mourinho hopes can breathe new life into Spurs?

It’s been chaos at the start of the year for Tottenham, as they went on a run of of six domestic defeats in seven games before smashing four goals past both Wolfsberger and Burnley.

The awful run saw them drop down to ninth in the Premier League and put pressure on manager Jose Mourinho, but his side are responding well in the Europa League.

The 8-1 aggregate victory over Wolfsberger gave Mourinho the chance to experiment with the youth talent at his disposal, including Dane Scarlett, who impressed after coming off the bench.

But along with the forward, who are the other young stars Mourinho has cast an eye over as he attempts to rebuild a Spurs side in his image? Sportsmail looks at the kids most likely to break through into the first team in the near future… 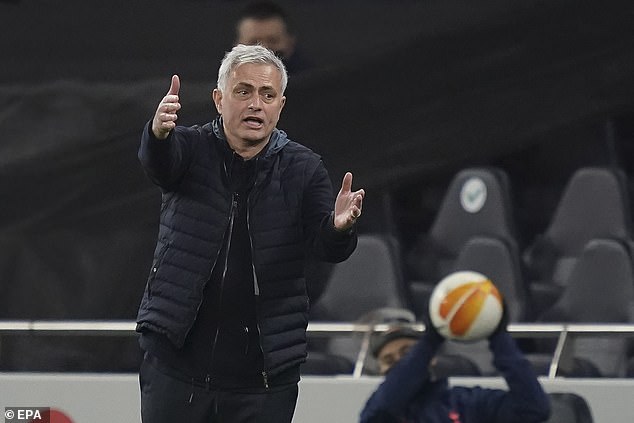 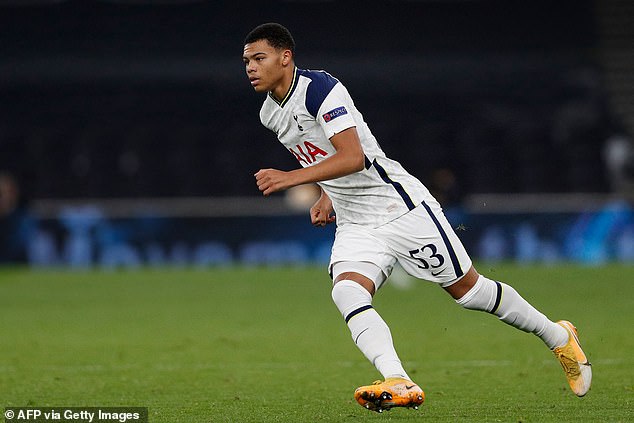 The most recognisable of the youth talents coming through the Tottenham youth system in that he is already a part of the first-team squad, even if he has been used sparingly so far.

Naturally a centre-back, he has also been deployed at right-back and the 21-year-old’s performances so far suggest he has a bright future at the club..

Although he made his debut under Mauricio Pochettino in a Carabao Cup defeat at Colchester United in 2019, it is Mourinho who has since handed him a further 19 appearances over the last two seasons.

Thigh problems have restricted him this term and he only made his first Premier League appearance of the season against Manchester City this month, as well as last weekend’s defeat at West Ham. Strong on the ball and with an eye for an interception, there are hopes he can help fix Tottenham’s huge centre-back problems in the long term.

Will he make it? Almost certain to at least become a fixture in the squad. 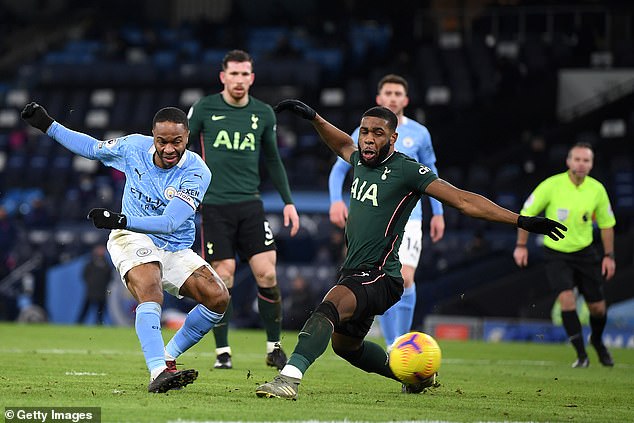 It was Pochettino who gave Skipp his taste of first-team football, making 12 appearances in total during the Argentine’s final full season at the club in the 2018-19 campaign – albeit most of them were cameo appearances at the end of matches.

The defensive midfielder featured 11 more times last term but only started once in the Premier League where he was taken off at half-time in the 1-1 draw at Burnley.

Mourinho believes he has potential but is not quite ready to fill another problem area for Spurs in the defensive midfield role, where he only has Pierre-Emile Hojbjerg to comfortably deploy

A lack of strength, which can be improved, has prevented him from being thrown into the deep end just in front of the backline, where he is comfortable playing as a deep-lying playmaker given his excellent passing ability.

The 20-year-old’s defensive work also has merit and he is highly effective pressing opponents. This season he has been on loan at Norwich City where he has been ever present in their march to the top of the Championship table.

Will he make it? Significant development this season will earn him another chance 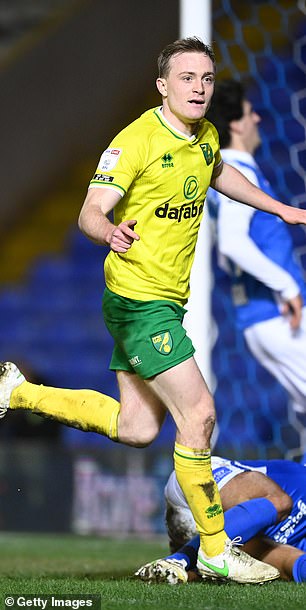 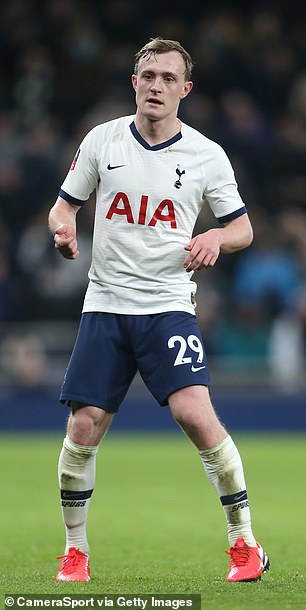 Signed from Leeds in the summer of 2019 for £12million, the midfielder’s first year as a Spurs player was a rather forgettable one, spending the first half of it picking out splinters from the bench at Elland Road and the second half doing a likewise at Queens Park Rangers.

This term he finally made his Spurs debut in a four-minute cameo against LASK in the Europa League before later playing the final 22 minutes in a win over Ludogorets.

He also played his first domestic match for the club as a second-half substitute in the FA Cup win at minnows Marine before sealing a move to join Stoke City on loan until the end of the season.

The right midfielder is still adapting to life at the Championship side but at just 20 years old still has plenty of time to build on his promising potential. His acceleration and skill can help him take on defenders and Spurs are still hopeful their big investment can pay off in the long run.

Will he make it? Promise is there but needs to start impressing in loan spells 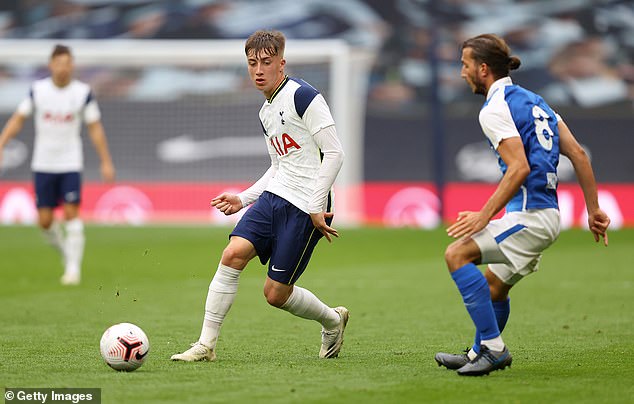 There’s currently a position open at Tottenham to play as an understudy for Harry Kane at centre forward, and Parrott has for a couple of years now been one of the main contenders for the role.

The 19-year-old is already a full Republic of Ireland international and was given his debut last season by Pochettino in the shock Carabao Cup defeat at Colchester. Parrott only played just over an hour in the loss but Mourinho saw enough promise to start experimenting with the striker once he took over from the Argentine.

A couple of Premier League cameo appearances as well as an extra-time showing at Norwich in an FA Cup exit followed, with the Portuguese admitting the striker was still just short of the first-team ability needed.

To gain first-team experience, he was sent out on loan to Millwall this term only to suffer a serious ankle injury that ruined the first half of the campaign. Now on loan at Ipswich in League One, he has still yet to find the net this term as he looks to rediscover his high finishing ability that made him such a star in Spurs’ youth set-up.

Will he make it? Unfortunate with injuries and starting to lose momentum

Parrott though has competition in the form of Scarlett, who back in November became Tottenham’s youngest ever player at the time at the age of 16 when he came off the bench against Ludogorets in the Europa League.

Since then he has featured twice more for Mourinho in Europe, including against Wolfsberger where he came off the bench to provide an assist for Carlos Vinicius having won the ball off a defender.

Mourinho already thinks highly of him, describing him as a ‘diamond’ who could be ready for first-team football next season. He also gave him his Premier League debut against West Brom earlier this month.

A pacey forward who has strong finishing ability with his head and feet, there is little weakness in his game and he could quickly develop into one of Tottenham’s most exciting young players in the last decade.

Will he make it? Too early to say, but he certainly has the ability

Best of the rest…

Mourinho has also handed out debuts to other Spurs kids, including midfielder Alfie Devine, whose substitute appearance against Marine in January made him the club’s youngest ever player at 16 years and 163 days – in a match where he also got on the scoresheet.

Against Wolfsberger he also gave first appearances to 20-year-old defender Marcel Lavinier as well as 17-year-old midfielder Nile John, who has been part of the Under 18 set-up.

Harvey White was another Europa League substitute against Ludogorets earlier in the season before playing 90 minutes in the FA Cup win over Marine in centre-midfield. The 19-year-old is now on loan at Portsmouth.

Goalkeeper Alfie Whiteman was given an eight-minute cameo against Ludogorets in the Europa League earlier this season, while Malachi Fagan-Walcott made his Spurs debut in a Champions League defeat at RB Leipzig last term. 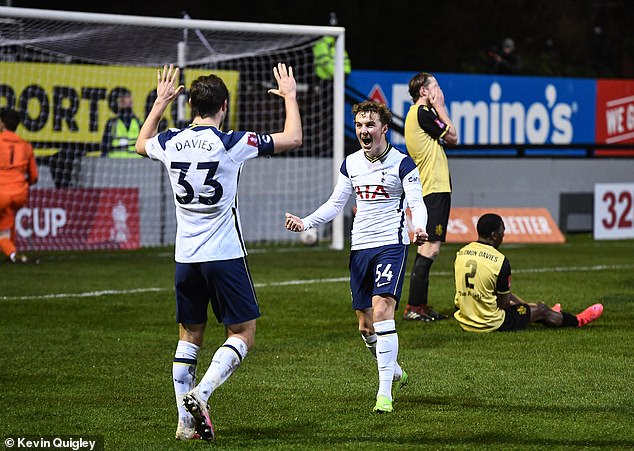 Tags: are, Jos, kids, THE, tottenham, Who
You may also like
Latest Posts