Doha: It’s been 24 years since Scotland last reached the World Cup, but you wouldn’t know it. Close your eyes and listen to the accents as the Socceroos train at their Aspire Academy base and you’d be forgiven for thinking the Tartan Army were in town.

Scotland and Australia have shared a footballing brotherhood that stretches back over a century, but over the last few years it has reached the point that, over the next three weeks, Scottish fans will be living vicariously through the Socceroos.

There are links wherever you turn. Martin Boyle, Harry Souttar and Jason Cummings, all born and raised in Scotland, have infiltrated the ranks of the Socceroos through their Australian heritage. Lyndon Dykes went in the other direction — he grew up on the Gold Coast and once aspired to play NRL for the Canberra Raiders, but now plays up front for Scotland.

Jamie Maclaren and Jackson Irvine, Aussies through and through, have Scottish fathers and once pulled on the navy blue at junior international level.

All up, there are seven Socceroos in Graham Arnold’s 26-man squad — Boyle, Keanu Baccus, Aaron Mooy, Cammy Devlin, Nathaniel Atkinson, Aziz Behich and Kye Rowles — who ply their trade in the Scottish Premiership, lending it a distinct Australian flavour, and plenty more who didn’t make the cut and are using that competition as a springboard to bigger and better things.

There will even be a couple of Scottish journos who are expected to join the Australian press pack in the coming days to track the progress of a team dubbed the ‘Jockeroos’ in Qatar. 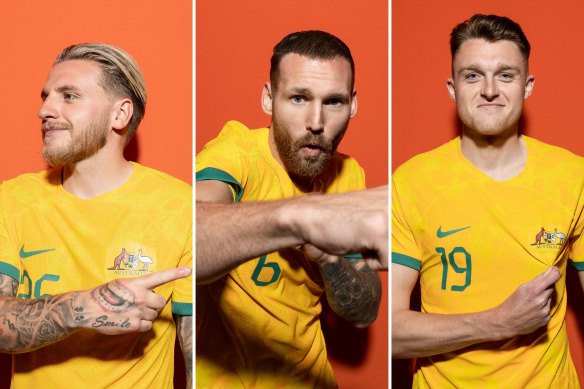 Jason Cummings, Martin Boyle and Harry Souttar are Scottish to the bone, but now play for the Socceroos through their Aussie heritage.Credit:Getty

And all that’s without even mentioning the broader influence on the Scottish game of former Socceroos boss Ange Postecoglou, who has become a revered figure there through his success with Celtic.

“Without Scotland in the World Cup, they’ll definitely be backing us, I think,” said Baccus, who is the pride of Paisley, in Scotland’s west Central Lowlands, after becoming the first player in St Mirren’s history to be selected for football’s showpiece event.

“It’s a great league. There’s a lot of Aussie boys going over there from the A-League, which is good for us as a national team and us moving forward.

“It’s a good step up from the A-League and physical-wise I think it gets your body ready for men’s football more so than what we’re used to with more games, and more demand on the body and the schedule.”

Baccus, who left the Western Sydney Wanderers at the end of last season to join the Aussie invasion in Scotland, is perhaps the biggest success story, with the 24-year-old’s exploits already catching the eye of English clubs. It’s the same for Devlin, who has quickly become a cult hero at Heart of Midlothian for his aggressive, antagonistic tendencies in midfield, and could soon parlay that reputation into a move to a club south of the border.

“I feel like playing over there now, after every game, there’s an Aussie there to chat to in every team, which is so good and makes you feel at home,” Devlin said.

“To have those boys in camp now at the World Cup is very good, and a credit to the Scottish league, to be honest, because it’s a very competitive league and there’s a lot of good players in and around it.”

It remains to be seen how many of them will actually be involved in the World Cup. Boyle, a first-choice starter for the Socceroos on the right wing, remains under a fitness cloud due to a knee injury he suffered in his last match for Hibernian.

He again failed to join the Socceroos at training on Wednesday night (local time) and could yet be swapped out of Arnold’s squad for Melbourne City’s Marco Tilio, who has been flown in as a standby player.

Stoke City’s Souttar and Hellas Verona midfielder Ajdin Hrustic also weren’t involved in the session as a precaution, but both are expected to be fit and available for selection for Australia’s opening match against France next week at the Al Janoub Stadium in Doha.

Watch every match of the UEFA Champions League, UEFA Europa League and UEFA Europa Conference League on Stan Sport. Returns for the Round of 16 in Febuary 2023, with all matches streaming ad-free, live and on demand.