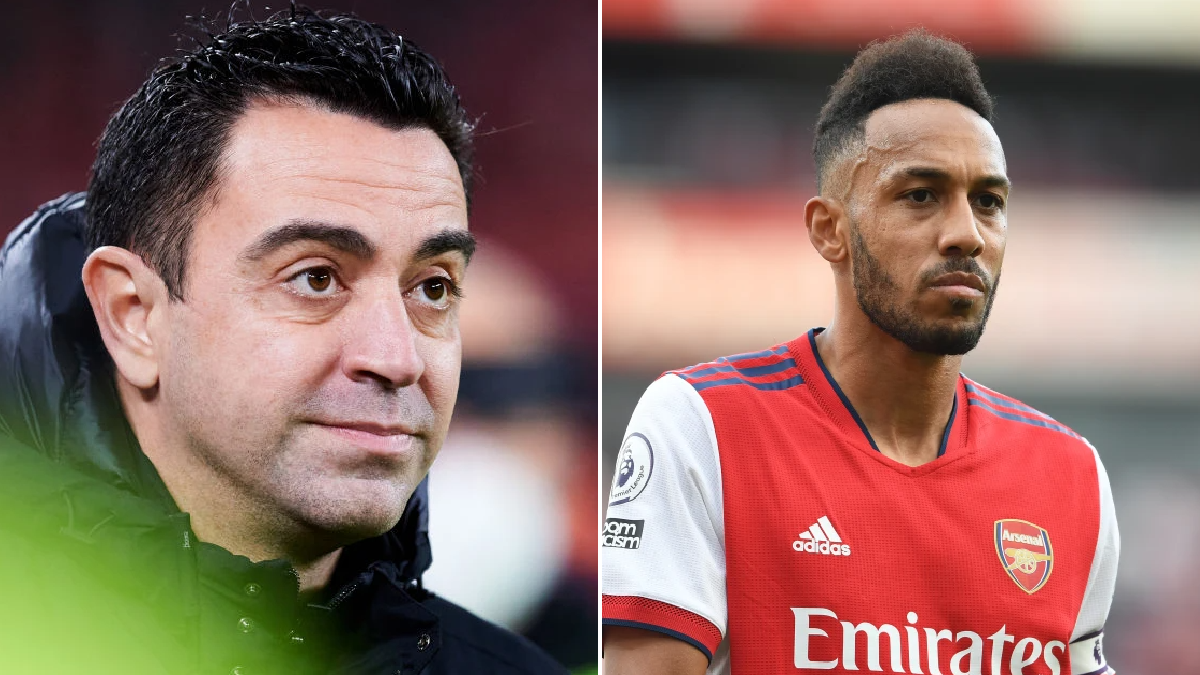 Barcelona boss Xavi previously told the club not to sign former Arsenal captain Pierre-Emerick Aubameyang as he wouldn’t be the right fit.

The Gabon striker scored 92 goals in 163 appearances for Arsenal but had not appeared for the Gunners since losing the captaincy in December due to a disciplinary breach.

It looked as though Aubameyang’s move to Barcelona had fallen through on deadline day, but Arsenal agreed to terminate his contract and Barcelona were able to secure his signature on a free transfer.

Aubameyang will now link up with Xavi at the Nou Camp but the Barcelona legend has previously had doubts that the forward would thrive at the Spanish club.

Discussing possible Barca signings in May 2020 – long before his managerial appointment – Xavi said: ‘[Sadio] Mane and Aubameyang can kill you in open space. But Barcelona need players who know how to move in small spaces.

‘I am thinking about players who would adapt to Barcelona and it’s not easy to find one.’

While Aubameyang’s exit appeared inevitable after he was frozen out by Mikel Arteta, it came as a surprise that Arsenal did not sign a replacement during the January transfer window.

Kevin Campbell has accused his former club of playing ‘Russian roulette’ in January and joked they may soon be forced to field a bench which looks like an ‘advert for Mothercare’.

As well as Aubameyang, Arsenal let 10 other players leave the Emirates last month, including five members of the first-team squad.

Campbell told Sky Sports: ‘If Aubameyang had stayed at the club he’s still an asset, he still would have been the best striker at the football club, so maybe you try and mend that bridge.

‘But obviously things broke down to a point where they thought it was right to get him out of the club and there were two or three takers for Aubameyang.

‘He wanted to go to Spain, Barcelona obliged, Arsenal got the deal done and they move on. I think Lacazette and Nketiah isn’t strong enough.

‘Lacazette is obviously very experienced and a very good player. Nketiah is not the answer – he’s going to be leaving in the summer.

‘I think Arsenal should have done business. They’ve been linked with Vlahovic, Isak and a whole host of strikers, but they’ve brought nobody in. I think they’re playing a bit of Russian roulette.

‘There’s holes in the squad, even more holes now as they’ve thinned the squad down tremendously.

‘The Arsenal bench could look like an advert for Mothercare with bottles and Farleys Rusks with the amount of youngsters they could have. It’s a very difficult game Arsenal are playing.’

Arsenal are currently sixth in the Premier League – two points outside the Champions League places – and return to action following the winter break with a clash against Wolves on February 10.