Real Madrid manager Zinedine Zidane will have a decision to make over Eden Hazard ahead of this evening’s Champions League semi-final first leg against Chelsea. Hazard is back fit and ready to face his former club, but has been short of form for Los Blancos this season.

The Belgian star has declared himself fit after coming off the bench in Real’s 0-0 draw against Real Betis in La Liga on Saturday.

However, the 30-year-old forward has struggled with injuries and his 15-minute cameo at the weekend was just his 14th appearance for Real Madrid in all competitions this season.

He has played just twice since January 30, but will be desperate to impress against the side he left in July 2019 for a fee that could eventually rise to £130million.

“I don’t see Eden having any doubts. He looked very good on the field the other day,” Zidane told reporters at his pre-match press conference on Monday.

“That was the most important, not feeling anything from his old problems. Now he is good, and now to push on. We are happy to have him with us, he will bring a lot to the team.” 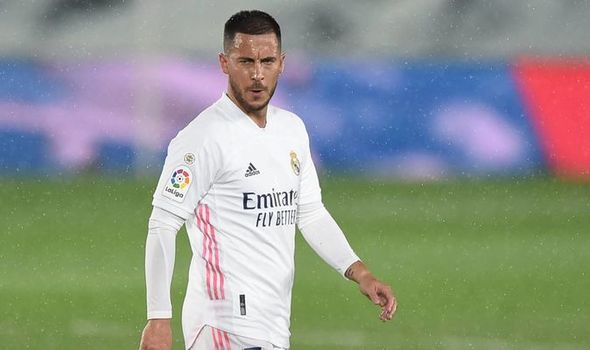 Hazard has managed just four goals in 37 games so far for Real and is likely to start on the bench at the Estadio Alfredo Di Stefano this evening, with competition for places tough.

Zidane’s side are on a 17-game unbeaten streak in all competitions and are not short of options to play alongside Karim Benzema in attack.

Vinicius Junior scored twice in Real’s 3-1 quarter-final first-leg win over Liverpool earlier this month, while Marco Asensio and Rodrygo will also be pushing for a start.

Real do have some absentees, though, with defenders Sergio Ramos and Ferland Mendy out with calf injuries, Lucas Vasquez sidelined by a knee complaint and Federico Valverde in isolation after testing positive for COVID-19.

Those unavailable players are offset somewhat by the returns of influential centre-back Raphael Varane and right-back Dani Carvalhal, while Nacho could continue at left-back.

Man Utd ‘in contact’ over new signing despite Bailly extension

Chelsea will be without midfielder Mateo Kovacic, who has a hamstring injury, but the Croatian is the only absentee for Thomas Tuchel, who is one of just two managers to have faced Real at least four times in the Champions League without losing.

The Blues have conceded just nine goals in 21 games under Tuchel, five of which came in one extraordinary defeat by West Brom earlier this month, but Zidane doesn’t expect them to just defend in Spain.

“I don’t think Chelsea will sit back,” he said. “They’re a complete team, they attack and defend well.

“They’ve done their job in the Champions League and are here on merit, just like us. We have to defend well and create chances when we can to cause Chelsea some problems.”