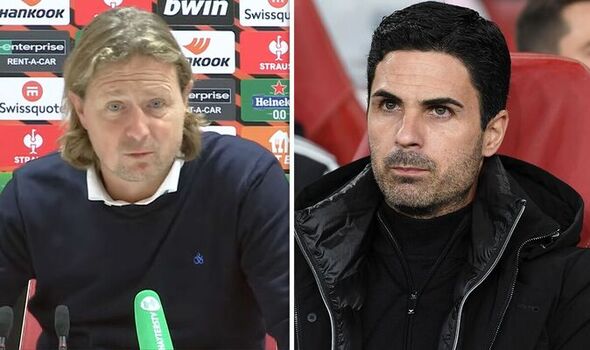 FC Zurich boss Bo Henriksen would love to see Arsenal end their 19-year wait for a Premier League title this season. The Dane insists it is about time the Gunners were champions of England again.

Arsenal confirmed top spot in Europa League Group A with a narrow 1-0 win over Zurich at the Emirates on Thursday. The Swiss side also provided a tough test for the north Londoners in the reverse fixture in Switzerland back in September, before Henriksen was appointed as head coach.

But victory continued a fine start to the season for Mikel Arteta, both domestically and in European competition. Arsenal are two points clear of reigning champions Manchester City at the top of the Premier League.

Henriksen has been impressed with what he has seen of the Gunners. And he believes it would be good to see them end their title drought this term.

Speaking in his post-match press conference, Henriksen said: “Of course Arsenal is a fantastic side, there’s no doubt about that. At the end of the day it could be fun to see them win the championship [Premier League].

“It’s a long time since they did that last time, so it’s about time. It’s a great team, we knew that from the beginning.

“Of course all our analysis was to see if we could close them down and hold them down on a few chances. We actually did that in many periods of the game but we knew they had the quality.

“They scored out of nowhere, it’s not even a fantastic big chance but there’s just so much quality in the team. Doesn’t matter if it’s the left-back or the right-back, they will always come to [get] chances.

“We knew that from the beginning and we did our best. Fair to Arsenal, they’re a really good side and I actually hope they go to be champions of England as well.”

Arteta returned the favour about Henriksen’s side when he spoke to the media. The Spaniard said: “I expected it to be a tough match. I’ve watched them in the last few games – how they’ve changed since their new manager arrived, how they played against Bodo.

“You’ve seen it and it was really difficult to get any real momentum with the way that the game developed. We have to adapt to that.

“We had some big chances that we didn’t put away and that made the game more difficult in the last 15 or 20 minutes. We didn’t control certain situations and we had to dig in, which we did. We found a way to win and we’re top of the group.”