A day that began in high drama with the 7.30am scratching of hot favourite Zaaki ended in even more tantalising fashion when the Cox Plate delivered a thrilling finish that was only decided in the stewards room: an extraordinary postscript to Australia’s greatest weight-for-age race.

State Of Rest, the Irish colt prepared by the man who is surely the best young trainer in the world, Joseph O’Brien, and ridden by his expatriate countryman John Allen, was first past the post in the $5 million race. 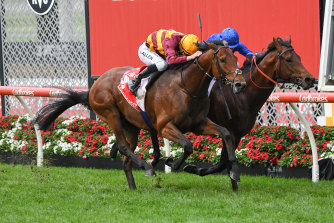 State Of Rest (outside) edges out Anamoe to win the Cox Plate at Moonee Valley on Saturday.Credit:Getty Images

Normally that is where it all ends, but in a week when the Cox Plate had been dogged by the controversial withdrawal on vet’s orders of European challenger Gold Trip and the balloting out of Japanese contender Keiai Nautique, that would have been far too simple.

State Of Rest, the son of former Caulfield Guineas winner and outstanding Australian sprinter Starspangledbanner, just got the better of Godolphin three-year-old Anamoe and Craig Williams, the pair drawing clear and waging a two-horse war down the straight.

It was a stirring sight, the race, which had seemingly lost its main attraction in Zaaki, producing, as it inevitably does, a story for the ages as Australia’s best three-year-old took on a high-class Northern Hemisphere three-year-old in a heavyweight title fight.

Inside the final hundred metres, as sinews stretched and both riders drove to exert every gram of energy from their straining partners, the two horses came close together, State Of Rest rolling in towards his rival.

Williams, a man who has few peers and no betters when arguing his case in the stewards room, was quick to announce that he was protesting the outcome, arguing that the narrow margin meant the interference was crucial and cost his horse the chance to win. 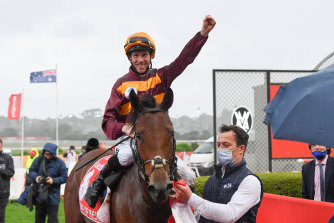 A jubilant John Allen returns to the mounting yard aboard State Of Rest before the protest.Credit:Getty Images

The big question for the stewards was whether the interference really did cost Anamoe the chance to become the first colt in 37 years – since Red Anchor in 1984 – to land the Caulfield Guineas/Cox Plate double.

To heighten the tension the inquiry – normally open to the media – was, because of COVID protocols, held behind closed doors – with journalists, broadcasters and punters up and down the country trying to read the runes as the officials deliberated.

As time went on the pundits, desperate to fill air space, suggested that the longer the issue remained unresolved, the more likely it was that Williams would win the verdict. As so many tipsters before them, this was a call that some – though not all – eventually got wrong. 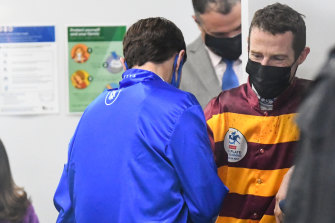 The stewards’ decision was worth far more than the $3 million prize, dazzling though that is. Sheikh Mohammed’s Godolphin operation hardly needs the cash, while the O’Brien stable has plundered millions of Australian dollars in recent years with two Melbourne Cup triumphs via Rekindling and Twilight Payment.

This was a decision that could add millions more to either horse’s stud value, which, at this level of the sport, is far more significant than the prizemoney.

A win could see State Of Rest’s or Anamoe’s post-race earnings increase by thousands of dollars for each mare he serves in his future career in the breeding shed. The status of winning Australia’s greatest weight-for-age race ensuring not just a lucrative future bankroll, but a place in posterity. 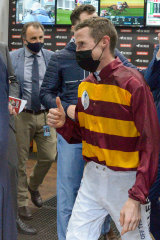 There was also a ‘racing diplomacy’ aspect to this outcome, which could not have come at a more sensitive time for Racing Victoria, given the reluctance this year of many European trainers to send horses to Australia for the carnival because of the stricter protocols and tests Racing Victoria has put in place.

When racecourse broadcaster Matt Hill announced the protest was dismissed and the placings stood, Allen and O’Brien’s representative, Mark Power, were the most relieved men on the course, as well they might be.

With this victory Joseph, who already holds a 2-0 Melbourne Cup lead over his esteemed father Aidan, now draws level with the master of Ballydoyle in Cox Plate triumphs, State Of Rest matching Adelaide’s winning effort in 2014.

What made the win more special for all concerned was the fact that it was Irish through and through. Allen made his name in Australian racing as a jumps rider, notching victories in all the great steeple and hurdle races for Darren Weir, who gave him his chance when he decided to move Down Under to gain more opportunities.

Weir was a huge admirer of Allen’s horsemanship, and when the jockey got his weight under control and was able to ride on the flat (where the weights are lower) he used him more than any other rider.

The Irishman is now well established as one of the leading men in Victoria, and he was delighted to land his first major, given its Irish connection.

His links with the O’Brien family run deep too; when he began his career in his native country he worked for Joe Crowley – Joseph O’Brien’s grandfather. As he said with relief, perhaps old Joe was looking down on them when they needed him most.

Tags: a, Day, drama, ends, Irish, of, with
You may also like
Latest Posts