Kane Richardon’s late withdrawal from Australia’s comprehensive one-day international victory over New Zealand on Friday was just the beginning of a truly bizarre day that has painted a picture of what sport will be like in the coming weeks and possibly months in front of empty stadiums.

Just hours after Cricket Australia announced the opening match of the Chappell-Hadlee series would be the first sporting fixture in this country played behind closed doors, it emerged Richardson had been quarantined at the team hotel and tested for coronavirus after coming down with a sore throat. 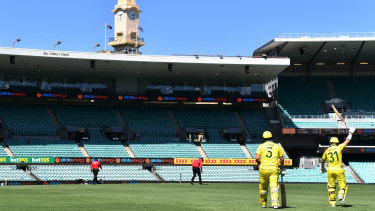 David Warner and Aaron Finch walk out to bat at an empty SCG. Credit:AAP

It is unclear whether fans would have flocked to the SCG to watch an autumn ODI with little meaning but, for those there to witness it, this was a very odd day as Australia snapped a five-game losing streak in 50-over cricket.

After David Warner (67) and Finch (60) began productively with a 124-run opening stand, No.5 Marnus Labuschagne (56) continued his impressive form to anchor the innings and help Australia reach a slightly below par total on a dry SCG pitch.

New Zealand crawled to 1-64 in the 20th over before Adam Zampa (2-50) produced a wrong'un for the ages to bowl Kane Williamson (19) and trigger a collapse of 4-32. Despite a late fightback from the Kiwis, man of the match Mitch Marsh (3-29 and 27 runs) and Pat Cummins (3-25) both toiled hard to snare three wickets apiece.

Broadcaster Fox Sports had to use spidercam at the toss to speak to both captains due to Cricket Australia’s two-metre exclusion zone policy.

Watching Brendon Julian ask Finch about his decision to bat first while sitting at a desk near the outfield was quite something.

Some disgruntled Kiwi fans didn't get the memo that this game was being played behind closed doors. Ground staff, security, police, paramedics, photographers, television crews, media and both teams were the only ones allowed inside the SCG. 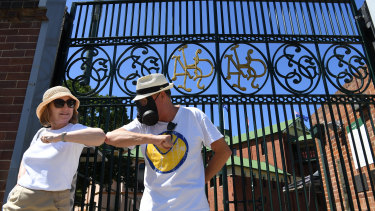 Spectators, one wearing a gas mask, outside the locked gates of the SCG. Credit:AAP

One man even turned up outside the ground wearing a gas mask.

When Labuschagne sprinted down the pitch and immediately called “two” before slipping over, the laughter was audible and banter in ear-shot.

Players waiting to bat clapped singles that echoed around the ground.

When Warner reached fifty he raised his hand to teammates – he seemed unsure if he had even reached the milestone – and one wonders whether his trademark hundred celebration would have been a little less animated had he brought up triple figures. 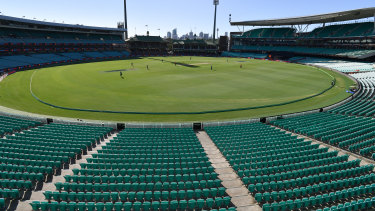 Empty stands at the SCG. Credit:AAP

When Mitch Santner bowled Steve Smith for 14, his celebration of choice was a foot-tap with teammates, while Lockie Ferguson was forced to climb over the fence in the Bill O'Reilly Stand to retrieve a ball that had been clubbed there.

It was tough times indeed but not for the security guards seated around the boundary enjoying a cruisy day at the cricket.

Get used to it, because there will be more of the same on Sunday and possibly for the foreseeable future as the sporting world comes to grips with a pandemic that appears here to stay.

Tags: a, as, at, Au, Day, SCG, strange, THE
You may also like
Latest Posts