A tall and slim non-drinker and non-smoker, Thomson claimed 22 wickets in his first three matches for Victoria early in 1969, including 11 in a tour match against Garry Sobers’ 1968-69 West Indies team.

After a brilliant 1969 calendar year, Thomson claimed 31 wickets in the opening four first class games of 1970-71, including nine against the touring English, and ended up bowling the first ball of the Ashes series in Brisbane. 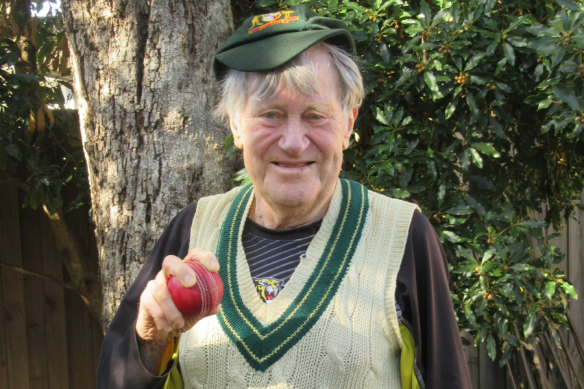 He did not have the same impact at Test level, claiming just 12 wickets at 54 in four Tests before being replaced in the Australian side by a raw Dennis Lillee.

Thomson’s special claim to fame is that he took the first wicket to fall in one-day international cricket, Geoff Boycott caught by Bill Lawry for eight from 37 balls. It was Thomson’s only wicket in his only ODI.

“Froggy” was a schoolboy nickname because of his loud voice but Ian Chappell, a Sheffield Shield opponent and Australian teammate during the 1970-71 Ashes series, found Thomson a quiet and shy character.

Chappell remembers a run-up akin to a marching soldier.

“People who were mesmerised by his action instead of watching the ball had real problems. He had a very different action,” Chappell told the Herald and The Age.

“I made sure I watched the ball. He was lively but not really quick and because he was so front-on he brought the back in, which I didn’t find all that difficult to play, although he could take the odd leg-cutter away from you.

Living as a recluse on a pension when he was last interviewed three years ago, Thomson said his action “never felt strange to me.”

“I’ve only seen a small amount of footage of myself bowling. But when I do, I still get a giggle out of it. I was no gymnast as a kid, but I could run, and my action just evolved from when I was about nine years of age,” Thomson told author Ken Piesse in Bob’s Boys, celebrating the 50th anniversary of Victoria’s 1969-70 Sheffield Shield title.

“Froggy, as he was known to many, was an outstanding contributor to Australian and, particularly, Victorian cricket,” Dr Henderson said.
“While Alan will be fondly remembered for his unorthodox bowling action, the skill he displayed in playing four Tests for Australia and as a member of Victoria’s Sheffield Shield-winning team of 1969-70 should not be forgotten.”