Cape Town: Iron man Pat Cummins is loving the opportunity to play for Australia in all three formats as he prepares to become the $3 million man in the IPL.

Once known for his injury battles as much as his enormous talent, Cummins has in recent years established himself as the most durable of Australia's big three quicks. 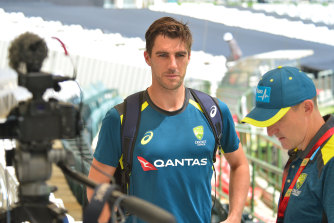 Pat Cummins is enjoying his spell with the white ball.Credit:Getty Images

"I feel really well-equipped, I feel like I've been training really well.

"My body is loving only bowling four overs. And I had a bit of a break leading into this as well so at the moment it's all going to plan."

Cummins will sit down with coach Justin Langer and captain Aaron Finch in coming weeks to map out managing his workload.

After the white-ball tour of South Africa, there are ODIs against New Zealand at home followed by a three-match T20 series across the Tasman.

There's also a white-ball tour of England scheduled for July as preparations ramp up for Australia hosting the T20 World Cup in October.

Cummins underscored his status as arguably the world's best fast bowler when he secured a staggering $3.17 million windfall in the IPL auction.

The huge payout from the Kolkata Knight Riders made him the most expensive overseas player in IPL history.

"It's good that I had a lot of practice leading into these games so I felt good and once I get over to IPL, it'll be nice that I've played quite a few T20s leading in," Cummins said.

"In terms of added pressure, I don't think so. You've got a lot of pressure on wherever you play.

"In India you're going to have 100,000 people cheering for you or against you whatever your contract is."

Tags: 'All, Australia, going, plan':, to
You may also like
Latest Posts