Luke Plapp is aiming to continue the rich history and success of Australian time trialists on the world stage and, at the age of 21, plans to win gold at a home Olympics in Brisbane, 2032.

As for his first elite time trial ride for Australia among the world’s best on Sunday in Wollongong? That, the rookie admits, will be a “lottery”.

While confident and on an upward career trajectory that has experts excited, Plapp spent last week recovering from his first ride in a grand tour, the Vuelta a Espana. Riding for Ineos Grenadier, Plapp said the three-week, 3280km race left him exhausted.

“[I was] on my hands and knees,” he said. “Absolutely fatigued. I am pretty buckled and smashed.

“It was something I have never experienced before. I severely underestimated it and I have just spent the last week trying to recover. It was brutal; I really didn’t expect it to be how it was. This Sunday will be a lottery.

“I would like to be up there fighting for the podium but, like I said, I am not sure where I am at. The last week at the Vuelta took so much from me.” 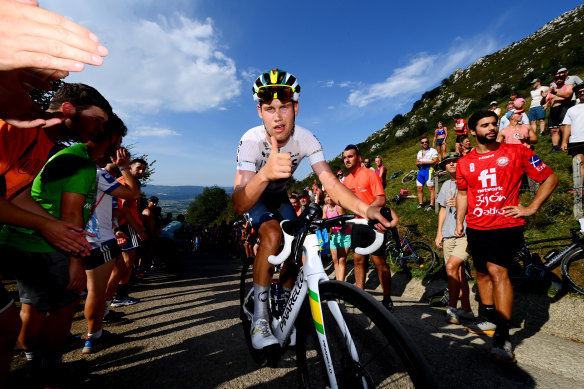 There was debate whether Plapp would race in the under-23 event on Monday, given he finished second in the category last year. But despite having a strong chance of winning the under-23s, Australian cycling – and Plapp – wanted the Melbourne youngster in the mix against the world’s best.

After winning an Olympic bronze medal in the men’s team pursuit in the Tokyo Olympics, Plapp proved his mettle on the road by winning the Australian national title earlier this year and wore the green and gold jersey in Europe this season. He finished sixth in the Commonwealth Games road race and fifth in the time trial, behind gold medal-winning Australian Rohan Dennis. 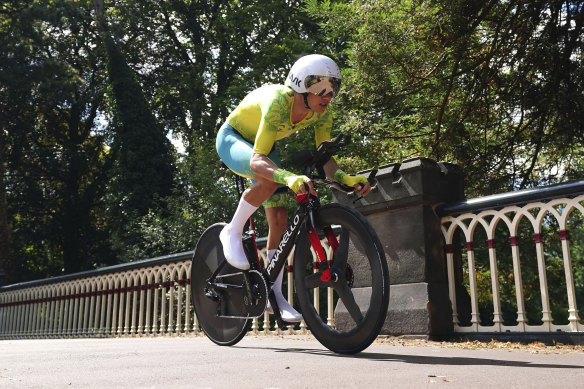 Australia’s Lucas Plapp competing in the Men’s Time Trial at the Commonwealth Games.Credit:PA

“I want to be racing against the best and looking towards Paris Olympics – that’s my biggest goal and I want to have the experience in the elite ranks,” Plapp said. “There isn’t a lot of pressure that I feel, from myself, and from the outside either.”

Plapp said he wants to follow in the footsteps of Dennis and Michael Rogers, who both won multiple time trial world titles.

“I would like to continue that legacy he has made. But not just Rohan, he came after Mick Rogers and all those guys. The Australian time trial legacy is massive, and always has been. We have shown we are so strong at it as a nation and we have a great history. Paris, LA and Brisbane, that’s what I want to be targeting, and I want to be winning a gold medal for Australia.”

Australia has an excellent chance of winning a medal in the first race of the championships, with Grace Brown among the favourites for the women’s elite time trial.

“There is like a top four in the women’s time trialling, and it’s hard to predict how the chips are going to fall exactly,” Brown said. “If I get on the podium I will be really happy, and if I win I will be ecstatic.

“I think I am in really good shape at the moment and there is a chance I can do something really cool.”

“I am more suited to an on-off rhythm,” she said.

“A lot of time trialling is about holding a consistent power for as long as you can but I am good at going a bit over, recovering for a little bit and that style. This course is more like that, so I am hoping it will play in my favour.”

Stan Sport is the only place to watch every race from the 2022 UCI Road World Championships in Wollongong from September 18 – 25.