Australia’s track cyclists have bulleted to three triumphs in London’s Olympic velodrome in a golden start to their Commonwealth Games campaign.

The men’s sprint team and the women’s pursuit quartet both roared to record-breaking triumphs on Saturday (AEST). 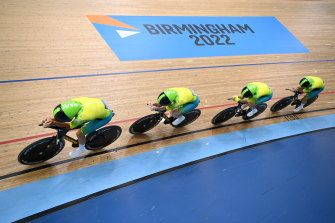 It came after the remarkable Paralympian Jess Gallagher and her sighted pilot Caitlin Ward kicked off the gold digging at the scene of the 2012 Olympics by earning Australia’s very first gold of the Games in the tandem blind and visually impaired sprint.

Still, though, amid the flag-waving, there was a sense of frustration about the end of an era as Australia’s flagship men’s pursuit foursome failed to make the final at the Games for the first time ever.

They had to settle for a bronze, after winning the race for third against Wales, but a four-medal start at least ensured Australia were in pole position to dominate the track program as they have in the last seven editions.

The evergreen Matt Glaetzer put the seal on the evening, picking up his fourth Commonwealth gold as he brought home the men’s team sprint title with a hammering of England’s trio after dazzling work from his lead-off man Leigh Hoffman and powerhouse Matt Richardson. 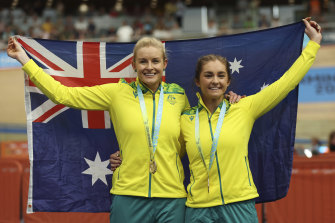 “It really does mean extra for me,” said Adelaide’s Glaetzer, reflecting on a terrific comeback after needing surgery to fight thyroid cancer and suffering injury woes.

“It’s been a tough couple of years, but I knew I was capable and wanted to deliver some more medals for Australia.”

The trio set a new Commonwealth Games record of 42.042 seconds, after also setting a new mark of 42.222 in the qualifying ride.

Gallagher, at 36, smiled that she was “getting better with age” after she and Ward won their final two races to nil against Scotland.

Already the only Australian to win a medal at the summer and winter Paralympics, she added: “To think I can have an impact on others, inspire them to chase their dreams – whatever part of life – that’s an honour for me, very humbling.”

Minutes after her win, Georgia Baker, Sophie Edwards, Chloe Moran and Maeve Plouffe blitzed their pursuit final, clocking 4:12.234 to easily beat a New Zealand team, who were effectively down to three competitors because of an earlier injury to one of their key riders, by 5.750s.

“Definitely the start of a new era,” beamed Baker, the elder stateswoman at 27 next to Edwards (22), Moran and Plouffe (23), predicting that “definitely, we could be world record breakers”.

The big shock came with the men’s pursuiters, as the Australians had won gold or silver at every edition since the event was added to the Games program in 1974.

Indeed, it was only four years ago the squad broke the world record in Brisbane.

But the new-look, inexperienced quartet of Luke Plapp, Josh Duffy, Conor Leahy and James Moriarty could only qualify third-quickest behind fastest qualifiers New Zealand, who went on to beat England in the final.

There were a couple of near-misses for Australia too with the women’s team sprint trio of Kristina Clonan, Bree Hargrave and Alessia McCaig losing their bronze medal ride-off with Wales. 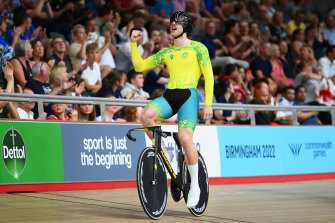 Australian sprinter Matthew Glaetzer takes in the moment after being part of the victorious men’s team sprint.Credit:Getty Images

And James Wootton and pilot Luke Zaccaria posted the fastest time in the men’s tandem one-kilometre time trial, only for the next three teams to edge them out of the medals.

Get all the latest news from the Birmingham Commonwealth Games here. We’ll be live blogging the action from 4pm-10am daily.