Australia will play a first-ever women’s Test match against South Africa as part of a major increase in long-form games, while a calendar window has been created for the long-awaited launch of a women’s IPL.

These are the key takeaways from the women’s global schedule for the next four years, formally released by the ICC on Tuesday, with the consistent presence of Test matches underlining Cricket Australia’s commitment to create new horizons for their world-dominating team to conquer. 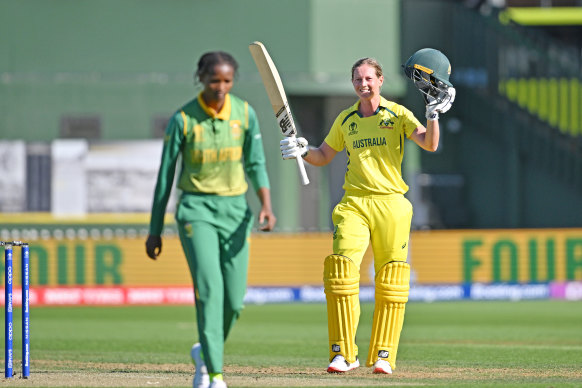 Australia met South Africa at this year’s World Cup; they will face one another in a first-ever Test match in 2024.Credit:Getty

Australia’s captain, Meg Lanning, has taken an indefinite break from the game in part so she can reset after achieving virtually every goal set for her team over the past five years – the chance to face South Africa in a multi-format series will be a new one.

This is a significant increase in Tests next to a mere three in the previous eight years – in her 12-year international career, Lanning has played just six Test matches.

“Our world champion women’s team have produced epic encounters against both India and England in recent years,” CA’s head of scheduling Peter Roach said. “To lock in multiple home and away series, including a standalone women’s Ashes in 2025, is a terrific outcome.”

At the same time, the February-March calendar window for a women’s IPL, after years of India’s BCCI scheduling only a brief “challenge”, sets up a viable global Twenty20 circuit for players that also features the WBBL and The Hundred.

That window also leaves room for the continued existence of the FairBreak invitational T20 tournament, played in Dubai this year in May.

Over 88 years of women’s Test matches involving Australia, their only previous opponents had been England, New Zealand and the West Indies. Australia’s last Test against a team other than India or England was New Zealand, as far back as 1994-95.

The ICC’s chair, Greg Barclay, had raised the ire of many players by suggesting earlier this year that he did not see women’s Tests “evolving at any speed at all”, Lanning included.

“At the moment we’ve got India, England and South Africa now playing as well,” Lanning said at the time. “There’s some opportunities there, and while some of the other countries aren’t in a position at the moment to do that, that’s fine, but I don’t think that means we shouldn’t try and push for that in the future and see what happens.

“It’s about being open to the possibilities and being ambitious with where we want to go with the game. Hopefully in 10 to 20 years’ time, there are 10 countries that are playing Test match cricket, but it’s not about it all happening right at this moment. We understand that not every country has the platform and the pathways and the resources to get it up at the moment, but that doesn’t mean we can’t work towards it.“

By adding South Africa to the Test match roster, another step has been made in that direction. West Indies, another traditional Test match opponent, is considered the most likely team to return to long-form matches next.