Will Pucovski has been officially ruled out of the first Test, with fellow Victorian Marcus Harris poised to take his spot at the top of the order after being called into the Australian squad.

Cricket Australia has confirmed that Pucovski will target a return for the second Test at the MCG on Boxing Day, but it’s understood he could not be risked for Adelaide given his history of having suffered nine concussions during his career.

Pucovski copped a blow to the helmet in a tour match against India last week, and has been suffering from mild concussion. Marcus Harris has been drafted in to the Aussie squad.Source:Getty Images

Fellow young star Cameron Green is also recovering from a mild concussion, but there is early confidence that he might pull through and play the first Test given he has no prior history of concussion.

Harris looks set to go from outside the original squad and into the starting XI, after Pucovski joined David Warner in the casualty ward and the other opening option Joe Burns in miserable form.

“Given the spate of injuries in recent weeks, we’re fortunate to be able to bring a player of Marcus’ calibre into the Test squad,” said national selector Trevor Hohns.

“Marcus has been in outstanding form for Victoria this season and has had the benefit of facing India’s bowlers in both three-day tour matches at Drummoyne and under lights at the SCG.

“At the same time, we are disappointed for David and Will that they will not be available for the first Test. Pucovski is struck on the helmet against India A at the start of the week.Source:Getty Images

“We have taken a conservative approach in managing Will since he sustained the concussion and hope he and David will be back to full health ahead of the Boxing Day Test.”

Green was at the team hotel resting on Saturday but was said to be in good spirits. It’s unknown whether Pucovski will still travel to be around the team in Adelaide or will return home to Melbourne.

“I got a word from Cracker last night,” Harris told Fox.

“There’s obviously been a bit of stuff going on with everything in the last couple of weeks, so it’s been good to have a hit against the Indian boys and another hit today. 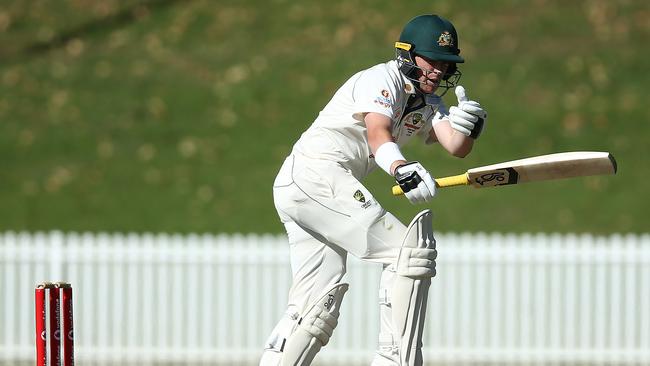 Harris is delighted to be back in the Test set-up.Source:Getty Images

“It’s been good, not to be the one that’s spoken about too much.

“I knew coming here that if I went okay I’d put myself in a position to maybe play, the way that things have been going.

“But this season I’ve just been focused on what I need to be focused on.

“I obviously wasn’t in the Test side last summer so I didn’t have that distraction coming into this summer and I’ve just been focused on what I need to do, so that’s been good.

“Now I’ve found myself where I am, and I feel pretty ready to go and I’m looking forward to it.”