Marnus Labuschagne says Australia's run feast has given them an early psychological hold over India.

But the star batsman also said the home side must be ready to adapt should David Warner face an extended period on the sidelines.

Warner suffered an adductor muscle injury while fielding in Australia's 51-run win at the SCG on Sunday night. He had to be helped from the field in the fourth over of India's unsuccessful run chase by teammate Glenn Maxwell and physiotherapist David Beakley before hobbling to a car and going to get scans. 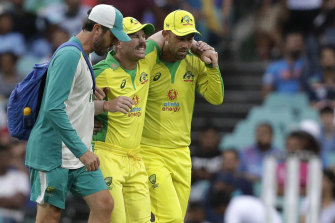 David Warner had to be helped from the field after suffering an adductor injury on Sunday night.Credit:AP

The results of those scans are set to be released on Monday.

Warner has played a key role in the home side already wrapping up the series 2-0, with the third and final one-day international match to be held in Canberra on Wednesday. He crunched 69 from 76 balls on Friday and 83 from 77 on Sunday before he was run out.

The injury not only means there will be change for the white-ball formats, including the ensuing three-match Twenty20 series, but also leaves Warner in doubt for the blockbuster opening Test in Adelaide, beginning December 17.

Labuschagne said Warner was a "very strong character" and would do everything he could to return as quickly as possible.

"He has been a massive part of us winning this series and it's not great that we have lost him. Like anything, it provides an opportunity for someone else to step up in the top order and make runs," Labuschagne said on Monday.

"There is always an opportunity for someone else when something like that happens. We hope that Davey gets a speedy recovery and he is back as soon as we can get him.

"I hope he is back for the Test series but I am not a physio or doctor. For us, we need to make sure we adapt for this last one-dayer."

The host nation has piled on intimidating totals of 4-389 and 6-374 through two games, with twin centuries from Steve Smith, each off 62 deliveries, leading the way.

While the Australian ODI XI differs from the Test side, Labuschagne said a strong start against an Indian attack that could largely remain the same come the battle for the Border-Gavaskar Trophy series had given the home side a psychological edge.

"100 per cent. I think cricket is a massive confidence game. Even though it is a different format, it's still gives you a lot confidence when you are scoring runs consistently," he said.

"The way Steve and Davey are batting currently, I have no doubt they will be able to transfer that into the Test summer. But, right now, there is still a lot of games to be played before that."

Heading into Wednesday's clash, Australia's options include promoting Alex Carey to the top of the order alongside Aaron Finch, while Australian spinner Nathan Lyon has suggested Matthew Wade could get the job, having previously opened at the international level.

Labuschagne, who delivered a fine 70 from 61 deliveries on Sunday, has put up his hand to open if that's what the selectors want.

Victorian star Will Pucovski, with back-to-back double centuries to start the Sheffield Shield season, had been battling incumbent Joe Burns to be Warner's partner come the first Test.

He and Burns were due for what even Warner had described as a "bat-off" in an Australia A tour match against India at Drummoyne Oval in Sydney, beginning next Sunday. However, Pucovski, named in an extended 17-man squad, is now firming to be awarded his maiden Test cap.

Labuschagne declared Burns, his Queensland teammate, was ready to carry the responsibility of being the senior opening partner come the pink-ball Test. Burns averages 38.3 in 21 Tests.

Warner's injury could see another batsman drafted into the Test squad. Veteran pair Shaun Marsh and Usman Khawaja have had strong starts to the summer for their states.

Selection chairman Trevor Hohns had said he would consult Warner on his opening partner, prompting Shane Warne to quip during the Fox Cricket commentary after Warner's injury: "Maybe they'll interview Will Pucovski and say: 'Who do you want to bat with?'"

Tags: Australians, edge, have, Ind, over
You may also like
Latest Posts