Bangladesh beat New Zealand for the first time in a Test match at the 16th attempt with a stunning eight-wicket victory at Mount Maunganui that snapped the World Test Championship winners’ 17-match unbeaten run on home soil.

Seamer Ebadot Hossain took 6-46 as Bangladesh dismissed the Black Caps for 169 on day five of the first Test at Bay Oval. The tourists chased down a target of 40 runs for victory for the loss of two wickets. 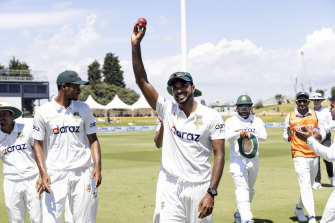 Bangladesh’s first win in any format of the game in New Zealand gave them a 1-0 lead in the two-match series. The second match starts in Christchurch on Sunday.

New Zealand resumed on 147-5 with a slender lead of 17 but were soon on the back foot when Ebadot clean bowled Ross Taylor for 40 and removed Kyle Jamieson for a duck in his first two overs.

Taskin Ahmed chipped in with his second wicket in the fifth over of the morning. He had all-rounder Rachin Ravindra caught behind for 16, and the Black Caps were rocking on 160-8.

Tim Southee had his middle stump removed in Taskin’s next over and Trent Boult departed for eight when he holed out in the deep to end the innings.

Shadman Islam scored the first runs of the chase but was caught behind for three and his fellow opener Najmul Hossain Shanto departed for 17 with victory in sight.

It was left to captain Mominul Haque, who scored 13 not out, and the experienced Mushfiqur Rahim, unbeaten on five, to usher Bangladesh to their historic triumph.