Australia have destroyed Sri Lanka in conditions made to order for the hosts, as Travis Head delivered a magical cameo to finish off the work of Nathan Lyon and Mitch Swepson.

After gaining a first innings lead of 109, Pat Cummins’ team spun out Sri Lanka for 113 in just 22.5 overs – the island nation’s shortest completed Test innings in terms of overs. 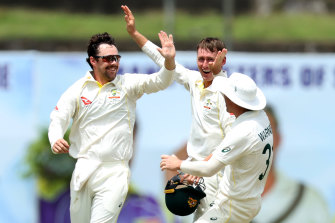 David Warner and Usman Khawaja knocked off the winning runs in just four balls, meaning the 10-wicket victory had been completed in fewer than 154 overs – comfortably clear of two full days’ play.

It’s Australia’s most rapid Test win in terms of overs since needing just 148.5 to beat Pakistan in Sharjah in 2002.