Not many people were prepared for what Muhammad Hasnain unleashed in his debut BBL spell for the Sydney Thunder – not least the three hapless batters he cleaned up in his awe-inspiring, record-setting first over.

It left commentators Brett Lee and Isa Guha struggling to find the right words to describe what they’d seen, and the Adelaide Strikers shellshocked as they limped to a 28-run defeat at the Sydney Showground, their top order obliterated by a barely known Pakistani kid who’d only just linked up with the team.

Ben Cutting knew, though. Having first laid eyes on Hasnain two years ago when he joined Quetti Gladiators in the Pakistani Super League, he quietly suspected the Thunder might have pulled off a serious coup when they brought in the 21-year-old a few days before Christmas.

“You’ve either got it or you don’t. He’s certainly got it,” the veteran said.

“The first time I saw him, we had a couple of dodgy light towers in Karachi, under lights, brand-new ball, I’d never faced this kid before.

“The first one was halfway down, somehow it didn’t hit me between the ears. I tried to switch on after that.” 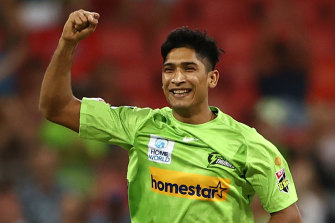 It’s a feeling Cutting will never forget, and nor will the many thousands who watched Hasnain announce his arrival in Australia on Sunday night as he became the first bowler to take three wickets in his first BBL over – nudging 150kmh with each delivery.

Hasnain took his first scalp with just his second ball, luring Matthew Short into a catch at deep backward square. The very next delivery, he trapped Jake Weatherald lbw – then two balls later, his pace undid Jonathan Wells as he mistimed a pull shot that landed with Cutting at short midwicket.

Henry Hunt was fortunate not to become victim number four, with Hasnain’s last ball fizzing just past the edge to end his triple-wicket maiden, before finishing with figures of 3-20.

Teammates now in two different T20 teams, Cutting has become Hasnain’s de-facto media spokesperson, since the man himself doesn’t feel confident enough in his English to give interviews – and he isn’t afraid to talk him up.

Hasnain made his international debut against Australia in March 2019, but Usman Khawaja and Aaron Finch made it an unhappy one, leaving him with 0-54 off nine overs. But having since set pace records in both Pakistan and the Caribbean, and with eight ODIs and 18 T20Is under his belt, Cutting sees him with a player with limitless potential.

“Where he could go, it’s anyone’s guess. He’s got a pretty calm head on his shoulders – I can’t say I’ve ever seen him flustered. It’s probably tough to get flustered when you’re bowling 155k an hour,” he said.

“I didn’t really know too much about him before I got over there – I knew he’d played for Pakistan and bowls like the absolute wind. He’s young and he’s raw. That’s a couple of the best traits, right there.”

The Thunder signed Hasnain two weeks ago – largely as back-up for Saqib Mahmood, who the team feared they could lose to the English Test side, and who is likely to play only one more BBL fixture before he jets off for England’s white-ball tour of the West Indies. He only landed in the country on Christmas night.

“It’s not a lot of fun facing him in the nets. I know the last seven days when he got here from Pakistan, he had to train with a few of the boys who didn’t travel with us, and they certainly did not enjoy that,” Cutting said.

“We saw the yorkers he bowled as well and he had them on a string. If he needs to go to the death early, he can. He’s still got the one that’ll whistle past your ears.

“That’s going to scare anyone – it doesn’t matter who you are.”