It is almost becoming a fresh production line, but Scone trainer Stephen Jones won’t care what you call it if another of his promising first-starters salutes at Monday’s feature Tamworth meeting.

Nana Neddy, a three-year-old filly by former top sprinter Swiss Ace, heads to the races for the first time off two tidy trials in a fillies and mares’ maiden over 1000m. 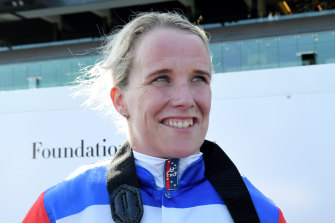 Samantha Clenton could steal the show with some plum rides at Tuesday’s feature meeting in Tamworth.Credit:AAP

Not including Mr Wong who won a Highway, the stable’s last four winners have all been in maidens. Beauty Betty at Scone and The Light Of Day at Taree were both on debut, Toro Toro won first-up at just his second start and Gold Codes broke his maiden at home 11 days ago.

There are some worthy rivals, however, and on an open card it might be an even bigger fill-up for the jockey Samantha Clenton.

She opens up aboard talented three-year-old gelding I’m On Break resuming for Tamworth trainer Melanie O’Gorman in a maiden before riding Newcastle debutante Solvency in that fillies’ edition against Nana Neddy.

Clenton then reunites with exciting Newcastle three-year-old Mbappe after a whirlwind maiden win at Scone a fortnight back. Next up she has one of the plum rides of the day aboard four-year-old mare Star Alibi in a class 3 handicap over the mile looking to pay back punters after going under as favourite in two runs back this prep.

Meanwhile, exciting Scone filly Emperor’s Star can take the next step towards a metropolitan start in a competitive class 3 to close the meeting.

Fresh from a dominant first-up win in smart time, the well-named daughter of Holy Roman Emperor can also loosen the tag of being a home-track specialist, with all three wins so far coming at Scone.

Form jockey Ben Looker gets his first chance aboard the three-year-old for Brett Cavanough, and it will be left to local gelding The Launcher and Wellington six-year-old Demonize to run down the short-priced fancy.

Tags: a, and, Clenton, for, go, Jones, set
You may also like
Latest Posts