Perth raider Regal Power was dominant in winning the world's richest mile race, defeating stablemate Superstorm, who Pike had the option to ride. 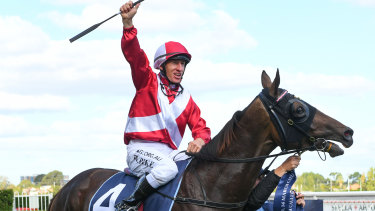 He couldn't decide so he flipped a coin early in the week and it came up heads, meaning he would stick with the four-year-old son of Pierro who finished second in the Australia Cup seven days earlier.

Ironically, it was the Australian Cup winner Fifty Stars who pulled out of the race before Tuesday's acceptances which saw Regal Power gain a late entry into the race.

A 28-year-old single mother of a four-year-old boy has also shared in the prizemoney, taking home $250,000 after winning a radio competition to be Regal Power's owner ambassador for the day.

In 35 career starts in metro Victoria, Pike had not won a race.

The eight-time group 1 winner said it was special to win a big race in Melbourne.

"It's definitely right up there [in my career]," he said.

"It's always been an ambition of mine. To be fair, I only wanted to win a metro city race so this is a little bit better than that so I've got to be happy with that. I've gone close a few times and seconds really hurt for me so it's nice to finally get that job done."

Pike said it was even more special to do it in Bob Peters' cerise colours for Grant and Allana Williams.

"The Williams camp, I don't think there is anyone training better than them. Their record in big races is just amazing," he said.

"Mr Peters, the way he keeps finding good horses year after year, it keeps us all in form and keeps us all looking good.

"They're my biggest supporter and always there for me so just some justification for Mr Peters and his entire set up and what he does for us and racing. I'm just happy I was able to get it done for him."

The leviathan owner landed in Melbourne on Friday but returned home to Perth following the ban on crowds, achieving something he wasn't able to with star mare Arcadia Queen in the spring.

She tackled two of Sydney's richest races in The Everest and the Golden Eagle, before returning home with hoof issues.

However, both Regal Power and Superstorm stamped themselves as stars of the future.

A trip north is still a chance for the pair, however Williams said he was leaning towards spelling them ahead of a big spring, with the Golden Eagle on Superstorm's radar.

"He's a quality animal that's probably going to be one of our best horses in 12 months," Williams said.

"He was a travelling companion. We knew that the mile was good for him and Bob said, ‘I'll send him because we need someone to be with Regal Power'.

"I reckon Bob knowing his horses will say, ‘Bring them home, put them away and hopefully we can come back later in the year'."

"Probably lacked a little bit of galloping room if anything, it was quite tight in front of her with Alligator Blood and Streets Of Avalon," he said.

"Opie [Bosson] thought he was doing the right thing getting onto the back of Alligator Blood, but he probably didn't take her into the race as we would have liked. But good, honest performance and she certainly won't lose any admirers for that."

The New Zealand champion will next head towards the Doncaster Mile in Sydney.