Leviathan breeding operation Coolmore has a new superstar stallion-to-be on their hands after Home Affairs won the three-year-old championship race they sponsor, the Coolmore Stud Stakes at Flemington.

Sydney’s premier jockey James McDonald has gone so close before to winning the coveted Derby day sprint, but Saturday’s race never looked in doubt for the Chris Waller-trained Home Affairs, who overcame a subpar performance in The Everest on wet ground to destroy an outstanding crop of three-year-olds over 1200 metres.

And the punters knew the sizzling performance was coming, backing the horse from $8.50 into $5 just before the jump. 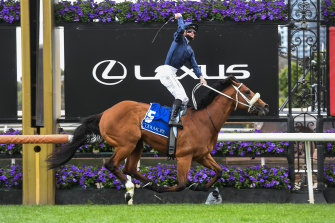 The $900,000 pay cheque for first prize is insignificant for Coolmore, in comparison to the $20 million-plus stallion value the son of I Am Invincible will boast once his racing days are over.

“This is what we come [to Melbourne] for,” McDonald said.

“To ride such a special colt like this; he was electric today. I couldn’t believe at the furlong that I was so far in front. That is the acceleration of this horse, he just idled through his paces early.

“Nothing could keep up with him and he ran out the six furlongs so strong. He is a weapon this horse.”

“He is such a good trainer,” McDonald said. 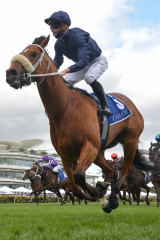 “We say it over and over all the time. He just changed a bit of gear, got the horse to relax.

“I did a bit of work on him the other day and gee he felt good up that straight. He just pricked his ears from probably the 600m on and when I let him go, he let rip. He’s a beautiful specimen.”

The field was as strong as they come on paper, with a Blue Diamond winner, a Golden Rose winner, a Blue Sapphire winner and a Roman Consul winner among his rivals.

But Home Affairs never looked threatened at any stage, jumping straight to the front of the field before gapping his opponents over the closing stages to win by three lengths, giving McDonald plenty of time to celebrate in the irons.

Ciaron Maher Racing’s Bruckner was the surprising placegetter, flashing into second at $17 the place, from perennial placegetter Artorius.

“He’s still a bit of a juvenile – like a 16-year-old kid. I think in the autumn he might mature into a man.”

Craig Williams said In The Congo didn’t appreciate the straight, while Damien Oliver said the same about Paulele. Jye McNeil said favourite Extreme Warrior “enjoyed a lovely trail throughout and [I] expected him to run a clear second, but he was disappointing in the finish”.

The race time of 1.08.73 was less than half a second shy of the race record, set by Our Maizcay in 1995. It’s the first time an Everest horse has backed-up into the Coolmore and won.