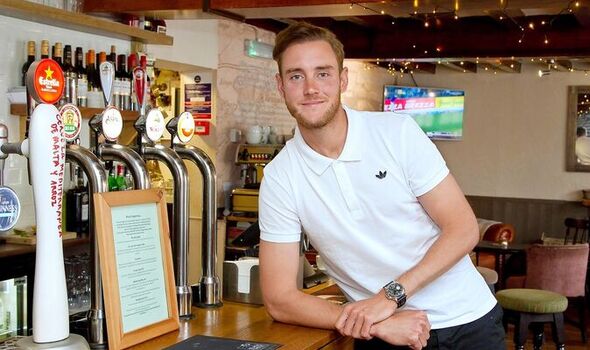 Catching up with the star fast bowler and part-time landlord during the second Test match against New Zealand this week, Broad insisted he is determined to rebuild and move on. “Reflecting on the events of the last week, one thing that has been such a comfort is the continued support, especially from our community,” he says. “It genuinely feels like we have everyone rooting for us. We’re working to revive our wonderful pub and look forward to welcoming back our local friends.”

It is the second setback for Broad, after the first pub he and former Notts and England player Gurney bought together was closed in 2021 as a result of the pandemic.

After five years, the close friends decided not to extend the lease on The Three Crowns, near Loughborough, blaming a “turbulent 18 months for the hospitality industry”, which involved lengthy periods of closure due to the coronavirus lockdown.

But despite this and the fire at the Tap & Run, in Upper Broughton, Nottinghamshire – believed to be accidental – the sportsman and occasional Sky Cricket contributor still sees a future in the pub trade after he retires from sport – even if he won’t be pulling pints on a day-to-day basis. “We’re a business that wants to progress and grow each year,” he says. “Cricket will be in my life in some capacity, whether that’s coaching or punditry which I enjoy because it keeps you really close to how the game is moving forward.

“The pub business is something I’m interested in and something that will keep me connected every month, but not something where I’m going to be behind the bar pulling pints and doing the day-to-day.

“That’s what Harry has gone into full-time and is doing fantastically well.”

That’s not to say Broad is not taking a close interest in the business. He is currently doing a postgraduate degree in strategic leadership, he reveals. And it’s clear he has half an eye on the future.

“I am 35 now and when you get to your early thirties as a sportsperson you have to start looking at how you want to grow yourself and in what way you want to go when you finish,” he continues.

“If you don’t do that, and you get an injury or you’re dropped and you’re finished quicker than you think – it can hit you very hard.”

Broad, who founded the Cat And Wickets pub company with Gurney in 2016, recently worked with P&G Professional, who provide cleaning products and solutions for businesses, to help judge its P&G Professional Community On Tap awards. A nationwide survey in support of its search for the country’s best watering holes revealed many Britons believe local pubs are still the glue that holds communities together.

“As a pub owner, I wasn’t surprised to see three-quarters of Brits agreeing pubs play a vital role in their communities,” he said.

“Since the pandemic, we’ve realised what an important thing pubs are for villages or towns, how they supported people, but also credit to the communities for getting out to their local pubs and driving them forward.

“Our vision is we want someone to feel as comfortable walking into our pub on their own to sit at the bar and have a pint as a family of four walking in to have lunch.”

The blaze at the Tap & Run came as Broad was preparing to face New Zealand in the second Test at Trent Bridge, the Nottingham-born player’s home ground. “Every time I play for Nottinghamshire or England at Trent Bridge, it does feel very special,” he admits.

What makes it particularly magical, he says, is knowing his family – including his father Chris, who played Test cricket for England for five years and is now a broadcaster and match official – are there. “It’s always a huge bonus of having your home Test match and the fact that you get your close family and friends to watch it.

“Both my mum and dad have been amazing supporters throughout my career and I actually mean from when I was a tiny boy.

“The thing about cricket is the hidden miles when they drive you around the country and sit and watch you do something you love.” Broad, whose father and mother, Carole, separated when he was four, was brought up around the game and recalls as a youngster carrying around a miniature Duncan Fearnley bat – the same his opening batsman dad used.

It was after a growth spurt at 17 that he first thought seriously about forging a different cricketing role to his dad by becoming a fast bowler. Broad also dallied with football and had a trial with an England underage team as a goalkeeper.

Did the inevitable comparisons and teasing about nepotism initially discourage him from following his father on to the crease?

“As a teenager, when I was playing for Leicestershire under-14s, I got a sense some people thought I was there because my dad played for England instead of my actual skill,” he admits. “So I suppose it was down to me to prove to everyone that I was good enough to play.

“I’ve lived pretty much my whole career as ‘Chris Broad’s son’ – I never had my own name. Then about five years ago, someone called him ‘Stuart Broad’s dad’, and that’s when I knew I’d made it. I jumped for joy.

“People who watched cricket in the 1980s and ’90s still call me Chris, even when fans are asking me to sign autographs. I say, ‘I’m Stuart, but I’ll sign as my dad if you want, up to you’,” Broad laughs.

“Dad and I are great mates, we’re really tight and there’s always been a nice rivalry between us.

“He was never shouting at me and saying, ‘Why didn’t you win that or catch that ball?’ he always asked, ‘Did you enjoy that?’ It was all based around my enjoyment of sport and I’ve been able to carry that through to my professional career – I always play my best when I’m enjoying it.”

Broad says the fact that they play such different cricket has been key to him being able to plough his own furrow.

“I became a fast bowler and dad was an opening batter. I suppose there are comparisons in looks and height but, actually, our skills were very different which has been a huge blessing for me.”

Since Chris’s day, cricket has endured accusations of elitism, sexism and racism with the Digital, Culture, Media And Sport select committee insisting the game must clean up its act or lose public funding.

In a report published in January, the committee warned of “deep-seated” racism following the emotional testimony given by ex-player Azeem Rafiq about the racist abuse he faced during two stints at Yorkshire from 2008 to 2018.

“Cricket’s been through quite a public shaming in the last few years, with some really uncomfortable topics,” says Broad.

“But I think one thing that the sport has done, moving forward, is with the women’s game, which is now one of the fastest growing sports in the world.

“The television rights and viewings of women in cricket are growing at incredible rates and professional players are really moving their games forward and improving rapidly. So I think cricket can take a bit of a pat on the back for how well it’s done inspiring young girls.”

Broad has been with The Saturdays’ singer and Radio 1 DJ Mollie King, 35, since 2018. They became engaged in January last year.

As a key player in the hospitality industry, how are wedding plans progressing? “Ha!

“It’s obviously been a tricky time to plan a wedding and we were looking at trying to do it last summer but then it just felt too risky, that it might get cancelled, and now everything is booked up so we’re having to play a slight patience game at the moment.”

So, no date or venue?

“No we haven’t got as far as that but it’s certainly at the forefront of our minds and it will happen at the beginning of next year.”

Another incentive to explore a different career – both he and Mollie have multiple properties in Nottingham and West London, where they currently live – is to spend more time together and start a family.

“In all honesty, I want to travel slightly less going forward,” says Broad. “I’ve loved it and it’s been awesome but I’ve done it for years now. It’s been quite deliberate to leave kids as late as possible because, with a cricket schedule, you can spend up to 300 nights away from home a year so it’s been quite a deliberate ploy from my point of view. Sport is one of those selfish things and that’s just been a choice since I was younger.”

For now, the couple are happy in London where they have business commitments but the long term plan is to return to Nottingham where they spent a happy lockdown.

“I love being back in Nottingham and in the future I can see us living back there.”

The winning entry for P&G Professional Pub of the Year at the Community On Tap awards will be announced next week.