Virat Kohli was a contrast to the end.

His last act as captain before suddenly resigning on Saturday will be remembered as the petulant ravings of a losing leader as his team went down in Cape Town last week, leaving India still without a series victory in South Africa.

It was one of the most undignified moments of a storied captaincy, bending over the stumps in Cape Town and yelling abuse at the host broadcaster after a video review did not go his way. 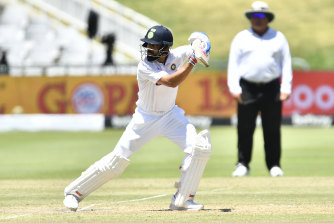 Yet for all his hotheadedness there were also great acts of strength and statesmanship which made cricket and its world a better place.

The most significant was his strident support of Mohammed Shami, the only Muslim player in the squad, after the fast bowler was abused on social media following the side’s T20 World Cup cricket defeat against Pakistan late last year.

Kohli blasted the abusers as “spineless” and “pathetic”, reserving particular vitriol for the trolls who blamed Shami for the loss.

“To me attacking someone over their religion is the most, I would say, pathetic thing that a human being can do,” Kohli said.

For a country and a region dominated by the enmity between predominantly Hindu India and Muslim Pakistan this is a powerful statement.

Kohli was also the unlikely defender of Steve Smith when India played Australia at the Oval in London during the 2019 World Cup, Smith’s first series after being banned for 12 months because of Sandpapergate.

On a promotional video to promote last summer’s series against India, when they interviewed each other, Smith asked Kohli about his intervention with the crowd after India fans booed the former Australian captain.

“I appreciate that by the way,” Smith said. “I think I sent you a message that night saying, ‘Mate, thanks for that, that was top class.’”

Kohli replied that nothing can be that permanent.

“I just felt like it’s not fair to target an individual personally. Because as much as we play against each other there’s a human side to things as well and at the end of the day we’re here chatting now, we do have a chat during the IPL a few times as well, so there are always instances where you are going to keep meeting individuals on the field,” he said.

“You don’t want to go nasty as such. That was one of the things I realised. Longer term you realise things from a larger perspective. I felt it wasn’t right to do.”

This was a very different Kohli to the angry captain who virtually accused Smith of cheating during an acrimonious Test in Bangalore back in 2017. Smith momentarily looked to the dressing room for guidance on a video review after being given out lbw, which is outlawed.

Kohli took Indian cricket to another level. His fierce desire for preparation and fitness was obvious.

During my 35 years of watching elite cricketers train and play, he is the only batsman I’ve seen remove the stumps and take them to the other end so he can bat in the bowler’s footmarks on a largely unmade surface. 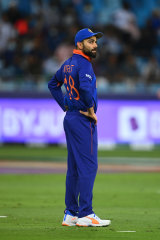 Teammates credit him with introducing previously unheard of skinfold tests into India’s regime.

But over the past two years Kohli’s star has started to wane. Since the tour to New Zealand at the start of 2020, Kohli is averaging just 28.1 in 15 Tests, with no centuries, and India lost the World Test Championship final to the Kiwis last June.

He had a difficult relationship with the Indian cricket board (BCCI) since stepping down as the Twenty20 captain after last year’s World Cup.

That cost him the one-day captaincy, with the BCCI installing Rohit Sharma as captain in both the short formats.

In the end it all seemed to become too much, which probably explains Kohli leaning over shouting into a stump mic.

But the lasting memory should be of Kohli’s clenched fist, square jaw and steely gaze celebrating any of the many fine moments India had under his leadership.