Godolphin trainer James Cummings has been getting his timing right this spring and is eyeing the prize his grandfather Bart made his own with outsider Avilius in Tuesday’s Melbourne Cup.

There is a similarity in the preparation of Avilius to those of The Everest runner-up Bivouac and Golden Eagle winner Colette in that the seven-year-old hasn’t won this spring but has been building towards his big day. 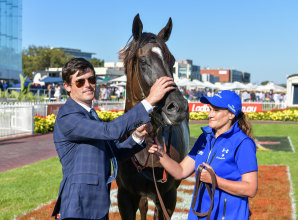 Avilius out to complete a great spring for Godolphin and James Cummings in the Melbourne CupCredit:Racing Photos

The past couple of weeks have offered the biggest prizes in Australian racing, starting with the $15 million on offer in The Everest then the $7.5 million Golden Eagle, but most prestigious is the $8 million Melbourne Cup and it has been Avilius’s focus since he returned in September.

Cummings grew up watching his grandfather win Melbourne Cups and trained in his first Cup runner Precedence in partnership with Bart, who won the great race a record 12 times.

Avilius has been there before, in 2018 after winning the Bart Cummings, a memory that still hurts the young Cummings. 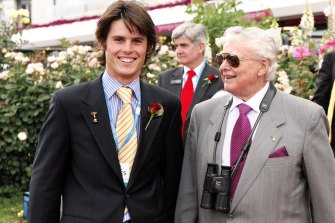 James and Bart Cummings together at Flemington in 2008.Credit:John Donegan

"His chance was gone before they left the straight the first time," he says quietly. Avilius suffered severe interference and was left trailing the field.

After that day, Avilius marked himself top-class winning three weight-for-age group 1s and chased the Cox Plate last year. But the lure of the Cup drew Cummings back to Flemington, even though Avilius has to carry 57 kg due to his resume.

"If there is anything to be said for making amends for past misfortune, he is capable of saying it," he said with a confidence that would do his grandfather proud.

Avilius flashed home in the Chelmsford Stakes for fourth then ran the best sectionals of the race in the George Main Stakes. He was runner-up in the Hill Stakes before running sixth in the Caulfield Cup, when he was not fully tested.

"Apart from the opportunity the horse might have had if his head was turned right instead of left in the Caulfield Cup at the furlong, everything has gone pretty right this spring," Cummings said.

"He has got the profile of a horse that everyone might doubt him in a two-mile race, but he has got mile speed in his legs and that's what you need to win a Melbourne Cup now.

"You have to sprint to the line to win the Melbourne Cup. He has that."

While the internationals have changed the form lines for the Melbourne Cup, Cummings drew back on what he thinks is the best form.

"In days gone by anyone doing their Melbourne Cup form would pay the closest attention to the Caulfield Cup," Cummings said.

"It was the best run of his current preparation, and you want to be going into the Melbourne Cup off the back of your best run.

"He is just going really and we have the confidence that since he has been here [in Australia] when we have set him for a race, he has always run well."

Tags: a, Bart's, bit, c, Cummings, has, of
You may also like
Latest Posts