Pat Cummins has overcome a hip problem and will play in the first one-day match against Sri Lanka in Kandy on Tuesday, but injuries are unsettling Australia’s preparations for the five-game series and two Tests to follow.

Mitchell Starc is now out for at least the first three one-day matches after slashing his finger on a boot spike, Mitch Marsh has a similar timeframe for his recovery from a calf injury, and Kane Richardson has been sent home with a hamstring tendon problem suffered during the most recent Twenty20 match. 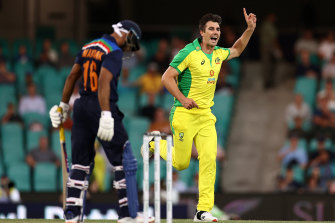 Pat Cummins will play his first one-day match for Australia in 18 months.Credit:Getty Images

Scott Boland has been called up as cover but white ball captain Aaron Finch said Australia were short of options.

“We talked about getting Nathan Ellis over from the UK, but he’s missed a couple of county games with a groin injury,” said Finch. “Riley Meredith and Wes Agar are not up and running back at home yet [during the off season].”

Richardson had no idea of how seriously he was injured when he attempted to bowl the final over of the match, which included three wides and went for 19 in total as Sri Lanka charged to an unlikely victory.

Scans revealed a six-week injury, so Richardson came home on the same plane as T20 wicketkeeper Matthew Wade, with Alex Carey returning behind the stumps for the one-day matches along with Marnus Labuschagne. 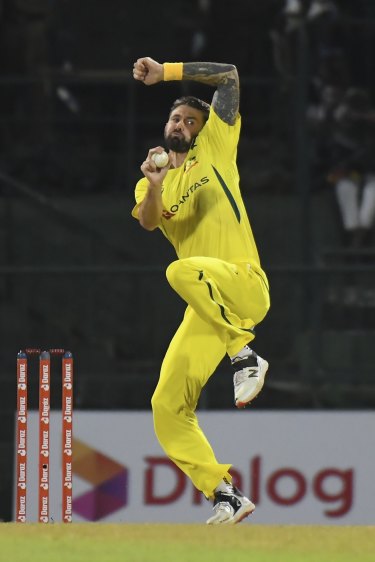 Kane Richardson has been sent home with a significant hamstring injury.Credit:AP

Captain Aaron Finch said he had not been aware of Richardson’s injury during the game. “That was pretty big of him to get through a T20 game of that intensity,” Finch said.

Australia must juggle their fast bowlers, with five one-day matches in 11 days before heading straight into a two-Test series, but injuries have made this more complicated. “It’s not ideal, but that’s a part of touring life in this day and age,” Finch said.

Finch said Cummins is fully fit for the first time in more than a year, with Australia’s Test captain and the world’s leading fast bowler leaving the IPL early to manage the problem before missing the just completed three-match Twenty20 series in Sri Lanka.

He will be part of a pace attack with Josh Hazlewood and Jhye Richardson.

Leg-spinner Mitchell Swepson has been left out because Finch believes the Kandy pitch will offer the fast bowlers good bounce on the evidence of the most recent T20 match.

“We saw in the first couple of overs the other day (for the third T20) that there was enough pace and bounce in the wicket for quicks to have an effect,” said Finch.

“We still feel as though going with the one spinner and the allrounders in Maxwell and Stoinis, Marnus can bowl a few overs here and there as well, that we feel we’ve got enough cover for that that fifth bowler.

“We feel as though two out-and-out spinners probably won’t be required as much on this surface but going into Colombo, that will definitely be considered.”