Australia have failed to win a gold medal at the track cycling world championships, less than five months from the Olympics.

It is the first time in 12 years that Australia have not won a gold at the track worlds.

Steph Morton took bronze in the keirin on the last day of action in Berlin to leave Australia with just one silver and two bronze.

Australia claimed a silver and a bronze in cycling at the Rio Olympics, prompting a major overhaul of Cycling Australia's high-performance program.

Hopes had been growing that the Tokyo Games would be more successful, especially given Australia won three gold medals in Olympic events at last year's track worlds. 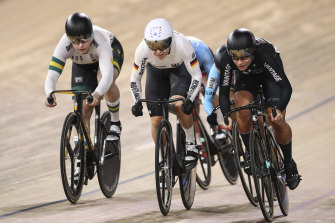 Stephanie Morton (left) was among Australia’s few medal winners at the world track championships in Berlin.Credit:Getty

Now Cycling Australia's performance director Simon Jones is pleading for calm in the wake of their barren worlds campaign.

"We want to win in Tokyo," Jones said.

"Yes, we were aiming for podium performances here, or very close to, and you can't hide the fact we have come up short in some areas – but we have to learn from it.

"We tried several different things here and we have to settle on a plan and then train to it.

"We gave everyone opportunities, and now we have to gather the facts and make some decisions now.

"There are five months to the Games, which is a long time."

The biggest concern for Australia will be the team pursuits, with their defending world champions in the men's and women's events failing to win any medals.

Morton and Kaarle McCulloch were defending world champions in the team sprint but they suffered from injury before the worlds and were pleased with their silver medal.

The other Australian medal in Berlin was a step forward with the untried men's team sprint combination surprising with their bronze.

Star sprinter Matthew Glaetzer was a late withdrawal because of a leg injury but Nathan Hart, Tom Cornish and Matthew Richardson impressed.

There had been speculation about whether Australia would field a team in the men's team sprint at the Olympics, given their previous lack of success, but Berlin was a significant success for them.

Emma Hinze won the keirin final, giving the German her third gold medal at the championships, and South Korean Lee Hye-Jin took silver ahead of Morton.

It is the Australian's first keirin world championships medal after she nearly crashed on the last bend in the final.

Dane Michael Morkov overcame 34 hours of self-isolation in a hotel room to win the men's madison on the last day, partnered with Lasse Norman Hansen.

Morkov was caught in the coronavirus scare last week that shut down the UAE Tour.

Elinor Barker won the only gold medal for Great Britain at the worlds when she took out the points race.

Tags: af, boss, calls, calm, Cycling, for
You may also like
Latest Posts