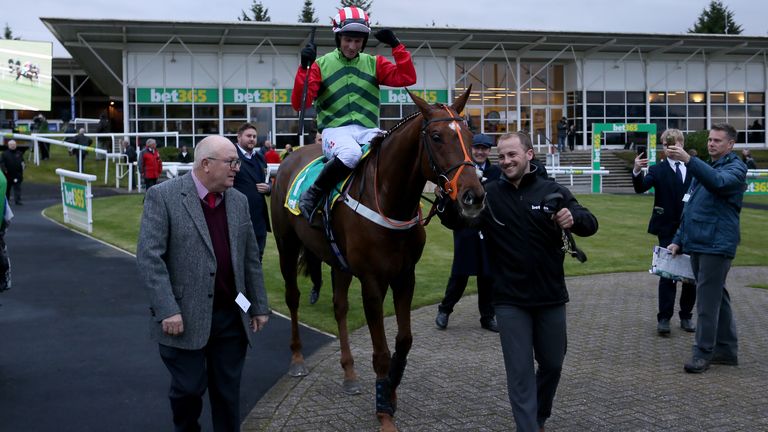 Ellison has also declared his classy stayer for the 888Sport Grimthorpe Handicap Chase at Doncaster on Saturday, but Kelso is the 11-year-old’s first preference.

Definitly Red was beaten over the course and distance a year ago, at very short odds – but whereas that two-horse race did not fit easily into his programme, this Listed assignment back at the Borders track has always been mapped out.

“It’s a good pot at Kelso. I wouldn’t say the track really suits him. It’s sharp, but it doesn’t matter – it’s a prep race for the National.

“Last year he wasn’t really ready for Kelso when he got beat. This year, it’s been planned.”

Sandy Thomson is delighted to be bringing Seeyouatmidnight out of retirement.

The 12-year-old has not raced since finishing 11th in the 2018 Grand National, and a suspensory problem appeared to have brought his career to a close.

However, all is well now, and Seeyouatmidnight is among Definitly Red’s four rivals.

Berwickshire trainer Thomson told Sky Sports Racing: “He’s back in action. We planed to go hunter chasing with him, (but) the weather scuppered that plan because they’ve changed the rules.

“The hunter chase and point-to-points have been off, so we’re taking the plunge at Kelso.

“The fire burns very bright. He’s never been a great workhorse at home, so you never know where you are with him. He does his talking on the course.

“It’s his local track, and he does have a great following and people love him.”

Thomson also runs Dimple – while Tom Gretton’s Kauto Riko and Paul Nicholls’ Saint Xavier, who is another with a second preference in the Grimthorpe, make up the quintet.

Ebony Jewel has the lowest rating of the seven runners, but Alexander would not be surprised to see some improvement on the heavy ground and with an extra distance.

“The handicapper says he’ll be last! I’m hoping he won’t be,” he said.

“If it rains again there tonight it will be very heavy ground – which I think he will handle very well. Hopefully some of the others won’t handle it as well.

“He’s wrong at the weights with the whole field, but I like to think he might improve a bit for the step up to two miles two furlongs – so I’m looking forward to running him.

“He ran very well round there, just beaten by a horse (Black Pirate) that James Ewart likes a lot. Hopefully, we’re better than our rating.”

Testing conditions will also help Multellie, according to his trainer Tim Easterby.

Multellie was on target at Carlisle recently, after returning from a seven-week break.

“He loves heavy ground. They put good money on, so we thought we’d take a punt.”

Nicholls’ Calva D’Auge and Cheddleton, from Jennie Candlish’s stable, are the top-rated horses of the seven.