Donald Trump has been trolled by the ICC, after he referred to India cricket legend Sachin Tendulkar as ‘Soochin Tendulkar’. The US President was speaking during the ’Namaste Trump’ rally at the Sardar Patel Stadium, in Gujarat.

Trump was speaking to more than 100,000 people at the world’s largest cricket stadium.

It was the biggest political rally of his career, and did his best to please the crowd by speaking about cricket.

Trump name-checked a couple of India’s players, who he claimed were “the greatest in the world”.

But, he struggled to pronounce the name of Tendulkar, who is largely regarded as one of the best players in the history of the game. 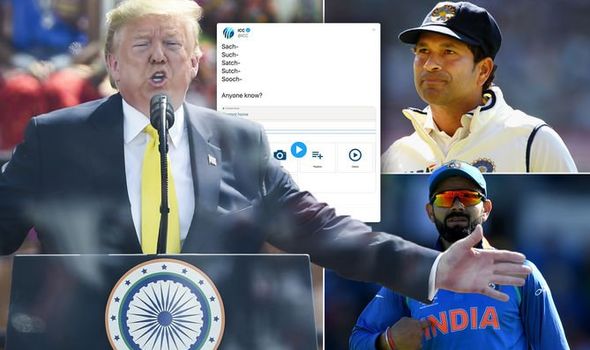 “This is the country where your people cheer on some of the world’s greatest cricket players,” Trump said.

“…From Soochin Tendulkar, to Virat Kohli. The greatest in the world.

“This is the country that built the tallest statue on the face of the Earth, to honour the namesake of this stadium, the great Indian patriot and native of this state, Sardar Patel.”

Tendulkar retired from international cricket in 2013.

He scored the most amount of Test match runs in the history of the game, after completing 200 matches in total.

The India star recorded 15,921 runs throughout his international Test career, averaging for more than 53.

Cricket’s governing body made reference to his Tendulkar mistake on Twitter.

The post was accompanied by a short video, appearing to show Tendulkar’s name being changed to ‘Soochin’, in its official database.

Indian cricket fans would have still been reeling from the country’s disappointing 10-wicket defeat to New Zealand last weekend.

India lost the first of two Tests against the Black Caps, with Kohli making just 21 runs over two innings.

New Zealand bowler Tim Southee stole the show in Wellington, as he took nine wickets in the match.

The second Test is scheduled to star on Friday February 28.

Tags: autoplay_video, cricket, Sports
You may also like
Latest Posts