Jockey Michael Poy has failed in his appeal to overturn a two-month ban for negligence after he misjudged the number of laps in a race at Kyneton last week.

The 23-year-old said he was “very remorseful and embarrassed” after he rode Dente at Kyneton last Monday, using his whip on eight occasions before easing the horse down after passing the winning post for the first time when there was another lap to run.

He was suspended for two months, but he appealed the severity of the suspension, arguing that he would be denied $55,000 in income while also copping social media and public backlash for the ride that was likely to stick with him.

Poy had told the Victorian Racing Tribunal that being remembered as the jockey who misjudged the number of laps in a race should be significant enough deterrence from it ever happening again.

But the tribunal dismissed the appeal on Tuesday, finding the penalty was “fair and reasonable”.

Steward Simon Carey described the ride as “unprofessional” and said the two-month ban matched what was handed to Rhys McLeod in 2002 when he also went a lap early in a Moonee Valley race.

He added there needed to be a deterrent for the crime after punters lost $30,000 in win and place bets on Dente, according to the top five betting institutions.

“[The] dramatic act of negligence can’t be tolerated and needs to be penalised accordingly,” Carey said.

“[Punters] have basically done their money cold. They had no chance of winning. As the horse has gone past the winning post for the first time and then been eased down, they probably watched their money go down the drain as well.”

But Victorian Jockeys Association chief executive Matthew Hyland, on behalf of Poy, said it was not necessary to factor deterrence into the penalty.

“This is a once-in-a-career sort of error,” Hyland said. “We never see anyone make this mistake twice.” 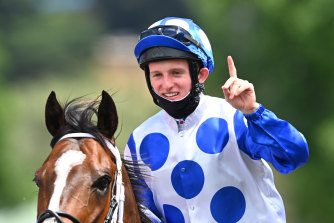 Poy said there were other mitigating factors at play. The day prior, he had taken Mother’s Day off after losing his mother earlier this year. He said he hadn’t planned to ride at Kyneton, but his manager had booked him for one ride that was a winning chance.

The ride on Dente was then a late pick-up on the morning of the race.

The stewards said the jockeys were reminded at the barriers by attendants that the race was over 2828 metres, but Poy had told stewards in their inquiry that he had not heard that.

Poy also added that he had bought a house seven months ago and had other financial commitments that would be severely impacted by the two-month suspension, which equated to $55,000 in lost income. Most importantly, he emphasised that he would be remembered by punters as “the jockey who went a lap early”.

“I’m definitely guilty, I’m not saying I’m not,” he said.

In dismissing the appeal, Judge John Bowman said he had sympathy for Poy, however the two-month penalty “seems to be a fair and reasonable one in all the circumstances” and was consistent with the precedent set in the McLeod case in 2002.