England’s embattled coach Chris Silverwood will miss the New Year’s Test at the SCG due to a positive COVID-19 case in his family.

The emergence of a seventh positive PCR test result among the England camp overnight means that the batting coach Graham Thorpe will take over head coaching duties for the fourth Test, as Silverwood and his family complete 10 days in isolation. 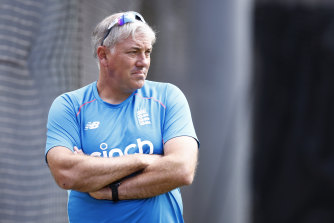 In addition to Silverwood, three other members of the England team support staff will also be unable to travel to Sydney: the bowling coach Jon Lewis, the spin bowling coach Jeetan Patel and the strength and conditioning coach Darren Veness.

“Following the latest round of PCR tests administered to the England Men’s touring party on Wednesday 29 December, one family member has tested positive,” the ECB said in a statement.

“As a result of the positive test, England men’s head coach Chris Silverwood will have to isolate for 10 days, along with his family, in Melbourne and will miss the fourth Ashes Test due to start in Sydney on Wednesday 5 January 2022.

“A fourth successive round of PCR tests will be administered today (Thursday). The touring party have recorded seven positive cases – three support staff and four family members – since a PCR testing regime was implemented on Monday 27 December.”

England and Australia’s squads are due to travel on a joint charter flight from Melbourne to Sydney on Friday ahead of the SCG Test.

Protocols around the teams have been tightened since the positive COVID-19 cases emerged within the England group during the Boxing Day Test, including greater social distancing and the avoidance of large groups.

It was possible that the emergence of more positive cases among players and support staff during the Melbourne Test may have seen it called off early. As it was, Australia retained the Ashes with an innings victory completed before lunch on the third day.

Much of the scrutiny following this result has fallen upon Silverwood, who is not only the coach but the sole selector of the England side. It is unclear whether he will have any say in the composition of the team for Sydney from isolation.