Trent Bridge: It is far too soon to bring on the Aussies. England have to renovate Jofra Archer or Mark Wood, and preferably both, to give their bowling a cutting edge before they can think of winning the Ashes next summer.

But what England can, and should, do is bottle the fizzy, but not quite giddy, exuberance in their batting that swept them to victory at Trent Bridge in the most dazzling of run chases. 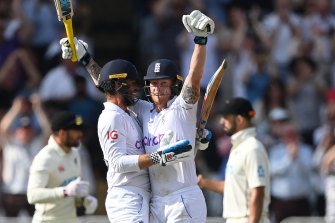 Australians have usually been able to rely on England’s cricketers to be restrained; they have been overwhelmed on the few occasions when England have batted like Jonny Bairstow and Ben Stokes did in the last session of the second Test against New Zealand.

It is when England play cricket at their exuberant and fearless best that they capture the country’s support to drive them onwards.

Defence has been the key-note of English cricket for many decades of its existence – and Len Hutton made it work in the 1950s – but England’s most glorious moments have usually occurred when attack has been their form of defence.

The Bairstow-Stokes partnership was just like how England batted in the Ashes of 2005, first on day one at Edgbaston when they changed gear – after almost 20 years of self-doubt – and thrashed 400 at five runs per over; and again when Kevin Pietersen was given the licence to launch on the last afternoon at the Oval to preserve the 2-1 lead.

The Bairstow-Stokes partnership was how England batted in the Ashes of 1985 and trounced Australia 3-1. 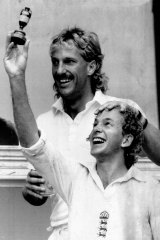 Their middle order then of David Gower, Mike Gatting, Allan Lamb and Ian Botham bears comparison with their batting line-up today – and Botham hammered home England’s psychological superiority when hitting 60 off 51 balls in England’s first innings of that series, which totalled 533.

So it was, too, in 1981, although that Ashes victory was more of an individual achievement by Botham. At Headingley, and again at Old Trafford, it was the same elixir, the same exuberant fizz, which the whole country could lap up as cricket was on free-to-air.

The next Ashes will not be on free-to-air in England, unless a new regime at the England and Wales Cricket Board makes a radical change. But it was not on free-to-air either in 1902, when Gilbert Jessop hit the fastest Test century for England, off 76 balls, one fewer than Bairstow.

England were 2-0 down in that Ashes series, and Jessop’s innings dragged it back only to 2-1, yet he caught the mood of the nation. It is only just that Jessop’s record should survive because he had two major disadvantages compared with Bairstow.

England in their fourth innings were chasing 263 on a damp Oval pitch and soggy outfield, unlike the Trent Bridge belter, and as the laws stood until 1910, a batsman was awarded six runs only for a hit out of the ground.

Jessop drove the ball straight into the Oval pavilion on three occasions, once into the top tier, which was the same as now, and was rewarded with only four runs. 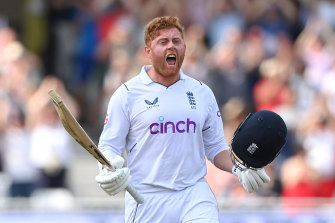 A jubilant Jonny Bairstow in Nottingham.Credit:Getty

England did not have Alex Lees to give them a base in 1902. They slumped to 3-10, and 5-48, at which point Jessop entered: “the Croucher” he was called, because he was a white-ball hitter a century ahead of his time, for by crouching he got under the ball for “leverage”.

He was a “deep-chested man with long arms” according to his biographer, Gerald Brodribb – Bairstow being deep-chested, too. Jessop, unlike Bairstow, did not play himself in: he scored off his first five balls, ran five into the vast Oval outfield, and hit 17 off the first five balls of an over (remember, no sixes except out of the ground).

Jessop’s main hits were the cut, pull, sweep and what sounds exactly like a slog-sweep, down on one knee. In other words, throw in their straight drives, and he and Bairstow hit in much the same arcs.

Under the new leadership of Stokes and Brendon McCullum, England can now at least dream about the Ashes next year, while working on their bowling, and can visualise what it would be like for Joe Root, Bairstow and Stokes to take down Pat Cummins, Mitchell Starc and Josh Hazlewood as if they were New Zealand’s bowlers.