We hear players say Test cricket is the pinnacle of the game and the Ashes in Australia is the ultimate challenge. This week I would like to hear them prove it by committing to the tour to Australia.

It has been a tough time living with bio-bubbles and restrictions. The players must feel as though they have lived in the Big Brother house for the last 18 months. 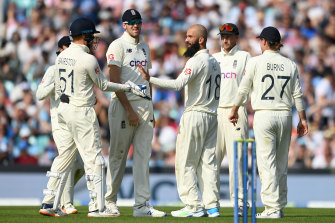 England’s Test team must be committed if they are to win the Ashes in Australia.Credit:Getty Images

I understand why they must be fed up with all the hassle and are desperate to have their families with them this winter.

It will be tough for them to be away from family at Christmas, if that happens, but we are in unprecedented times. Occasionally in life you have to do things you do not want to do.

But going to Australia and winning back the Ashes is the opportunity of a lifetime. It is like playing in the Super Bowl. You might get only one chance.

After all they have been through, this could go down as the greatest Ashes victory. It must be enticing to think you could be remembered forever as the group who went to Australia, quarantined, spent weeks away from your family but won the Ashes back against the odds. What a story that would be.

The only way England have a chance of beating Australia is if everyone commits early. We cannot have players going to the Twenty20 World Cup and then playing two or three Ashes Tests and going home. England must be able to get a group of players together who are ready to go through 10 tough weeks.

What disappoints me is the fact not one player has said he is willing to miss the Twenty20 World Cup to play in Australia. We have another T20 World Cup next year, but it will be four years before there is another Ashes tour.

I would love to hear a player say he will miss the T20 World Cup and the West Indies tour in March to play in the Ashes.

What a message that would send about what Test cricket means.

But if we have players who say: “I will go to the T20 World Cup, come home and then go back to the Caribbean in February with my family, then to the IPL,” then they are playing the system. We cannot have players picking and choosing when they play for England.

I know it will be tough over Christmas but whoever goes to Australia, whether playing, commentating or writing on the game, is unlikely to have their family with them. Only the partners of players and staff will be allowed to go to Australia and many of them will probably not fancy the two weeks’ quarantine. I understand why you would not want to go through that.

At Christmas it will be hard for the players. But we will reach a line-in-the-sand moment this week. The longer the discussions drag on, the more negativity will creep in.

Joe Root needs to stand up and say: “Who is with me? Who is willing to bite the bullet and go for it? It is one Christmas away from family, do it. Go for it.” I look at James Anderson. He has spent 18 years playing for England. How much time has he spent away from his kids? For his last Ashes tour shouldn’t the players buy into this and give Jimmy a good farewell? He did it once in 2010-11. Could he do it again?

One thing is certain: you have no chance of winning in Australia unless you are totally committed. It is not about toughening up. For 10 weeks it is about committing to each other, to the game, to the long haul and to winning the Ashes.

If not, then they will be eaten alive. At the moment it is all very negative. England have got themselves in a mess, and I understand why. But there needs to be a reckoning where players say, “right I’m going,” or “I’m not going”. Who is in, who is out? It goes for the management, too.

We cannot have rotation like we did in India. That will not work in Australia; they will be hammered if that happens. Look at India in Australia last winter. They had a lot of injuries and lost players at crucial times but because they were a strong, committed group of players, they defeated Australia. Australia are a good side in their own conditions, but India proved they are beatable.

Once they decide to go to Australia, the players will be within their rights to ask for easier restrictions when they have completed their quarantine. The last thing they should agree to is to have strict restrictions imposed on them once they are through the quarantine period, especially when they are fully vaccinated. It would not be fair. But if they are given guarantees that they can live a normal life once out of quarantine then what they decide will tell me a lot about the state of the game.

This winter is the crunch for me. It is when we find out what players are willing to do. If they are willing to play a World Twenty20 and miss the Ashes then a very dangerous precedent will be set.

I have no problem if players choose T20 cricket over Test cricket – that is their choice – but be honest about it. I just get fed up when they say Test cricket is the pinnacle but their actions do not back it up. They are just saying what people want to hear.

If Test cricket really is the pinnacle, then show us. Make the sacrifice this northern hemisphere winter and go to Australia.

Tags: commit, England's, must, stars, to
You may also like
Latest Posts