Champion jockey Mark Zahra has been hit with a three-month ban after stewards on Saturday learned that he too attended Wednesday night’s illegal gathering at a Mornington Airbnb.

Zahrha pleaded guilty at a stewards’ inquiry on Saturday and was handed the same bans that Jamie Kah, Ben Melham, Ethan Brown and Celine Gaudray received on Friday. 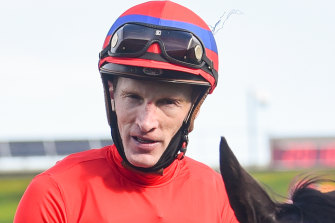 The Caulfield Cup-winning jockey will be forced into isolation for the next 14 days and will be ineligible to compete over the spring carnival.

He did not ride at Saturday’s Memsie Stakes meeting at Caulfield due to an elbow injury.

“Stewards heard submissions on penalty and after doing so took into consideration his guilty plea, his personal circumstances, that this was his first offence of this nature, that any suspension this time of year includes missing feature race meetings, and that the individual expressed remorse,” Racing Victoria said in a statement.

“The stewards also took into consideration the serious nature of the offending, the potential severe ramifications that could flow from a breach of Racing Victoria’s COVID-19 protocols, and that the penalty must be sufficient enough to deter others from breaching the COVID-19 protocols.

“The penalty must also be seen to publicly address the seriousness of the offending and make clear that compliance with the COVID-19 protocols is non-negotiable.

“Taking into account the above considerations, the stewards have determined that Mark Zahra will have his licence to ride in races suspended for a period of three months. The suspension begins at midnight on 28 August 2021 and will expire at midnight on 27 November 2021.

“Given that the stewards were unaware until late today that Mark Zahra was also in attendance at the Airbnb in Mornington on 25 August 2021, the stewards will give consideration to the evidence tendered by all five jockeys in relation to the inquiry.”

In evidence given on Saturday, stewards learned that Zahra left before police officers were called to attend the Mornington property due to a noise complaint.

Police handed fines of more than $5000 to each of Kah, Melham, Brown and Gaudray, plus two non-racing participants for breaching the state’s coronavirus regulations and curfew.

Tags: Fifth, hit, Jockey, three-mo, with
You may also like
Latest Posts