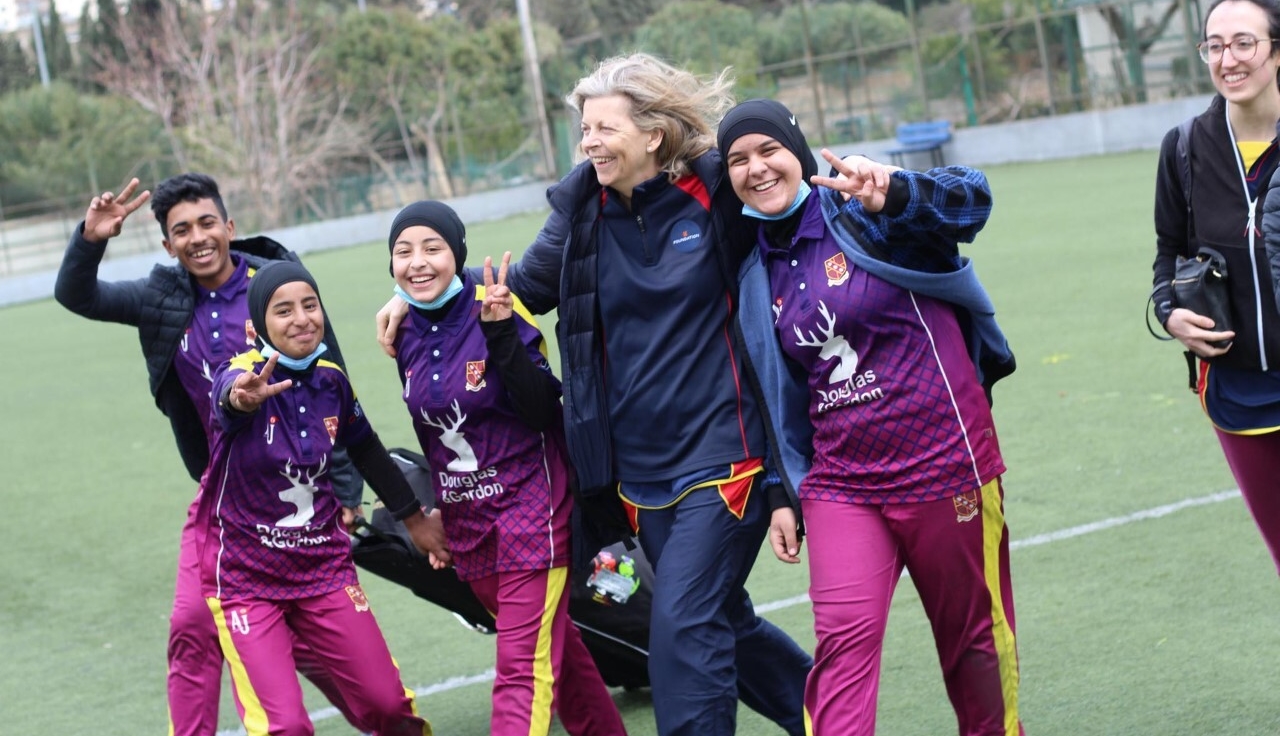 She saw friends die in Syria. She left her doll there, which used to provide comfort amidst the trauma of war.

Watching her playing cricket, one would never guess her backstory. She is absorbed in the game: focussed, determined and happy.

Cricket helps her to forget and to be a child once more. I will never forget watching her play, a vision of the healing power of sport.

I spent most of my working life in Afghanistan, first as a wartime doctor, before later setting up a charity that delivered educational and cricket opportunities to children.

The cricket element of our work was an unlikely add-on, prompted by my son who wanted us to champion the national team in its beginnings and to give young people the opportunity to play.

Its success, and the joy and hope it brought to a nation, was a surprise, and one from which I learned how the heady combination of education and sport can transform lives, particularly for girls.

I now find myself as Director of MCC Foundation, the charitable arm of Marylebone Cricket Club, based at Lord’s Cricket Ground, with a whole new opportunity to transform lives through cricket.

Shatila refugee camp in Lebanon may seem an unlikely place to start. I have just returned from a visit there alongside MCC President and former England Women’s captain, Clare Connor, MCC CEO Guy Lavender and MCC Foundation Trustee Mehmooda Duke.

The purpose of our trip was to visit the Foundation’s outreach projects in three of Lebanon’s refugee encampments: Shatila, Bourj-El Barajneh and Beqaa Valley.

Set up in 1949, initially as a temporary home for displaced Palestinians, Shatila has swelled within its 1k boundary, today housing more than around 40,000 refugees, many Syrian. Although now physically removed from the conflicts, trauma clings to its residents, who bear both emotional and physical scars. And for the most part, these camps provide little refuge.

There is minimal access to basic services like healthcare, education and social welfare, and these barriers are worse for women and young girls, who face domestic violence, discrimination and exploitation. Early marriage is rife.

For children who have been born into the camps, the odds are stacked against them from the outset, with no official papers, and repressive employment regulations barring them from entering most industries outside of the camp. They are suspended in statelessness.

When you grow up surrounded by darkness, it is hard to adjust to the light.

And then there is Alsama. Tucked away down a tiny alleyway, in a settlement where every inch of land is occupied by overcrowded shelters and the skyline is obscured by hanging cables, Alsama (Arabic for ‘sky’), a secondary school, is a beacon of hope and comfort for 200 Syrian boys and girls.

As you enter, the happy hum of voices, carefully swept floors, and radiant smiles of every child you meet is incongruous with the unforgiving world outside its freshly painted walls.

Set up in 2019, over the course of two years Alsama has become a thriving centre of excellence where children, once barely educated, now study maths, Arabic and English as core subjects, are offered creative writing and poetry lessons and – the driving force behind our visit – cricket coaching.

Amidst the fastest-growing refugee crisis since World War II that we are currently witnessing in Ukraine, the need to provide opportunities such as this could not be more obvious.

Visiting our projects in Lebanon, we saw first-hand just how enriching this wonderful sport can be. The soft skills synonymous with cricket – confidence, discipline, teamwork – are on display in abundance, but it is the therapeutic properties of the sport that are most nourishing.

Travelling between the camps and playing alongside children up to six hours a day, the exuberance and determination on display is a joy to witness. Girls play alongside boys – and often outplay them.

The most promising girl cricketers are now junior coaches, coaching boys and girls and challenging the status quo. The freedom they feel to escape the confines of the camp is evident and their energy boundless.

Most impressive is the way they treat each other with such respect, love and encouragement. They are a chain, each of them a link, and they have an indestructible bond, which holds them tight together.

They encourage each other; the boys respect the girls and talk of feminism, and they are 100% there for each other. If ever one falters, their friends’ hands go out to support.

The opportunity to learn from a former England Women’s captain, Clare Connor, provided further vigour and inspiration to both the female coaches – former Alsama Cricket participants who have adopted leadership roles – as well as the children themselves.

Cricket is the only structure for these children, and it is a lifeline. They never miss a session, they fashion bats from any wood they can find, they dream of playing for Lebanon, or perhaps even their beloved Syria, one day.

As well as operating in Lebanon, the Foundation delivers hubs in Nepal, where few girls get to play sport, helping young people access and progress through the game. In the UK, the Foundation runs a project delivering free coaching to around 3,000 promising state educated cricketers, girls and boys, across more than 70 hubs. The percentage of girls is set to rise from 30% to 50% in the next few years.

Over the past few months, the Foundation has hosted weekly sessions at Lord’s for Afghan refugees and their families, providing a safe space for girls to come together, rebuild their confidence and learn new skills at the home of cricket.

Sport truly is unique, and our experience in Lebanon crystallised this in our minds; as we consider the extremely challenging circumstances many young girls face around the world, we must cherish and promote anything that confronts these barriers.