Connections of Bivouac and Loving Gaby have pointed to each other as the main dangers in Friday night’s group 1 William Reid Stakes.

It was Loving Gaby who won last year’s Manikato Stakes at the same track and distance before Bivouac got revenge, beating the filly in the Newmarket Handicap earlier this month. 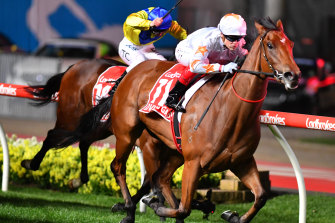 Loving Gaby charges to victory in the 2019 Manikato Stakes.Credit:AAP

The Godolphin colt is yet to win a weight-for-age group 1 but trainer James Cummings believed Friday night’s sprint at the Valley shaped perfectly for the three-year-old.

"It’s a terrific race, as it should be," Cummings told RSN Radio.

"Not only are the really good three-year-olds in there at the top of the market, but there’s your Australia Stakes winner from earlier on this year, Scales of Justice, he’s freshened up, the Lightning Stakes winner, the Oakleigh Plate winner, Mystic Journey.

"I think this is a really good opportunity for Bivouac to earn a crack at a weight-for-age title and I think the perfect follow-up after his dominant win in the Newmarket."

Cummings has no real concern about barrier 1 despite Bivouac finding trouble from the same gate when favourite in last year’s Manikato Stakes.

"Hugh Bowman’s riding the horse on Friday night and he’s not exactly the sort of jockey that’s going to lose any sleep over barrier one in a group 1," he said.

"Hugh’s pretty open-minded about it and I think that’s what you have to be because from barrier 1 the pressure dictates to you more than the other way around. The horse is in excellent condition and he’s quick out of the gates."

Cummings believed that Loving Gaby, who ran second in the Newmarket, was Bivouac’s greatest danger. 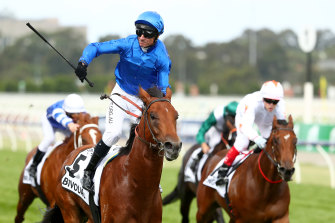 "Loving Gaby is the horse to beat, for sure," he said.

"If the speed is really on and Exceedance can turn it around, he’s used to running the fastest last 600 of the meeting, that horse. If the pressure is on too much, it brings that horse into it."

Craig Williams, who will ride Loving Gaby before jetting to Sydney to ride at the Golden Slipper meeting, said he couldn’t be happier with the Ciaron Maher and David Eustace-trained filly.

"Ever since that first-up run [in the Lightning], her work has been excellent," he said.

"I was expecting she was going to win the Newmarket because in her work I commented she was airborne.

"Bivouac was just awesome on the day, he was too good.

"She gets back around the bend where she won her group 1 weight-for-age race and she’s worked extremely well since. It’s an amazing race, it’s probably the strongest William Reid I’ve seen in years."

But Williams didn’t believe barrier one was necessarily a bad thing for Bivouac.

"If he steps slow then he needs luck but if he steps like he did last start then more likely than not [he won’t need luck]," he said.

"There’s a lot in his favour compared to when he first competed at the Valley as a three-year-old spring horse.

"I’d love the same result, so whatever it takes. [But] it does shape to be a different race than the Manikato."

Tags: biggest, Bivouac's, Gaby, is, thre
You may also like
Latest Posts