Gold Trip, the horse prevented from racing at the Melbourne spring carnival last year due to strict welfare rules, finally showed his class to win the Melbourne Cup at Flemington on Tuesday.

Trainers Ciaron Maher and David Eustace have had to contend with obstacles beyond their control but the horse, which had run fourth in Prix Arc de Triomphe before coming Down Under last year, always had first-rate ability.

“We knew we had bought a good horse, and it was frustrating that they wouldn’t let us run him last year,” Maher said. “It was embarrassing and a debacle, really.

“He passed all the scans, but they had a problem with his action and that was it, we couldn’t race last year.”

Maher admitted that after he was forced to float Gold Trip to Albury for a barrier trial in July, there was a point where he felt the horse might never be able to race in Victoria.

“To get him cleared to race he had to trial, and we still couldn’t do that in Victoria, so Lucy Yeomans took him to Albury, just to get a ticket [to race],” Maher explained. “That’s just part of the things my team do behind the scenes. He got beaten in the trial there as well. 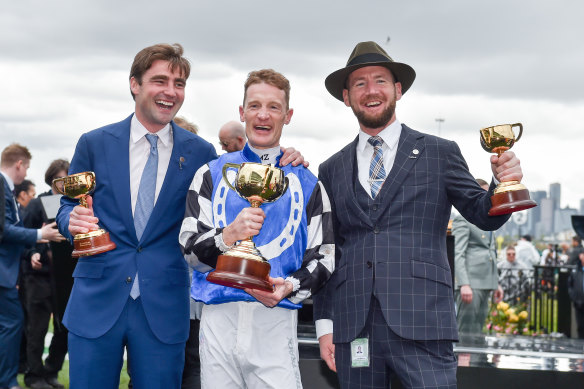 “Back then, I thought he would be staying in Sydney and we started to look at races up there for him. Once they were happy with him here, we were always looking at the Melbourne Cup for him.”

There was no doubting Gold Trip’s talent but, before Tuesday, his ability to win had proven the other major problem for Maher and Eustace: In 15 starts, he had won once.

The pair took Gold Trip a traditional path to the Cup and his second place in the Caulfield Cup had the stable’s confidence growing about his chances at Flemington. “He always had a win like this in him, and he has got a lot more left in him as well,” Maher said.

Gold Trip, lumping 57.5 kilograms, became the first topweight to win the Melbourne Cup since Makybe Diva and, like Verry Elleegant last year, the best horse won the race – leaving no excuses for rivals left in his wake.

Emissary was brave running into second two lengths behind and High Emocean was another 1¼ lengths back in third.

Gold Trip’s win sent his huge ownership group into ecstatic celebrations. But he had been difficult to buy for Luke Murrell and Jamie Lovett due to his unconvincing record in Europe.

“We looked at him four or five times because he was the right horse, but he wasn’t a winner,” Murrell said. “He had won a group 2 at Lyon, and he was only getting beaten a couple of lengths in the best races over there.

“Eventually, we thought if we didn’t buy him we would regret it. This is why you buy a horse like him. Just have a look at these people, it is amazing.”

Gold Trip started at $21, mainly due to the 868 days since his last and only win. As the field circled the home turn, Mark Zahra had him in clear air and decided it was now or never.

“This horse was so unlucky in the Caulfield Cup. We were so gutted when he got beaten,” Eustace said. “When he made the run I thought, ‘Not again’. Today, we knew he was strong, and he just showed that with the way he won.”

There was delight also for the minor placegetters, and no excuses.

“The plan was to ride him quiet, conserve all his energy,” said Patrick Moloney, who was runner-up on Emissary. “We did that and he ran a massive race. He was beaten by a better horse on the day.” 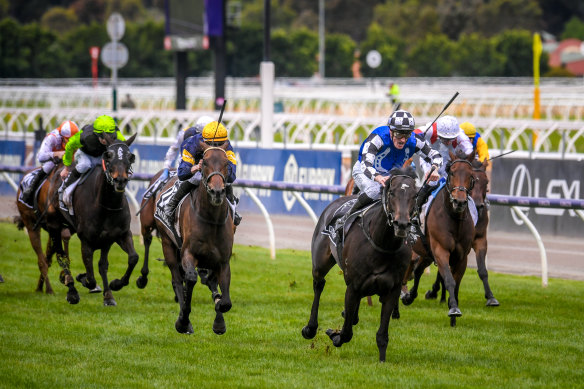 In the third-placed stall, High Emocean, a stablemate of the winner, left jockey Teo Nugent smiling.

“She gave me one of my first city winners in town and then to run third in the Melbourne Cup, is pretty much the ultimate dream. I couldn’t be happier,” Nugent said.

Favourite Deauville Legend was game staying into fourth, which averted a rumoured $50-million loss for new bookmaker Betr through its opening promotion. Kerrin McEvoy felt the two miles might have proved just beyond the Irish import.

“The ground has probably just gone against him a little bit,” McEvoy said. “He didn’t step great, but I was able to tuck him in towards the inside, got a nice trip around and he travelled really well. He might not stay past a mile and six (2800m) but he ran a good race.”

Interpretation, another stablemate of Gold Trip, failed to finish the race after being eased down by Craig Newitt, who reported post-race that something was “not right” with the horse’s breathing. But a stable representative said it appeared he simply had a wind issue.