The ascension of young gun Cameron Green has created a selection squeeze, while intrigue surrounds whether Will Pucovski has done enough to secure a deal as Cricket Australia prepares to announce its contract list for a bumper year.

Following a year in which the men’s team played precious little national cricket, CA is set to announce its contract list on Thursday, ahead of a year including a white-ball tour of the West Indies, a Twenty20 World Cup, a home Ashes campaign, and an away Test tour against Pakistan. 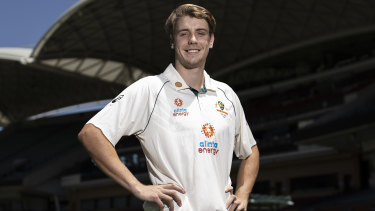 Under the memorandum of understanding, CA must offer between 17 and 20 men’s national contracts annually. Players can be upgraded during the year if they meet designated games thresholds.

While Pat Cummins will remain Australia’s No.1 ranked cricketer, and Marnus Labuschagne can expect a pay rise, West Australian all-rounder Green is widely expected to be handed a deal after breaking into the Test team over the summer on the back of outstanding domestic form.

Victorian tyro Pucovski made a half-century on Test debut before being sidelined with a shoulder injury. Selection sources claimed there had been a debate as to whether he had done enough to warrant an immediate contract and cement his spot at the top of the Test XI alongside David Warner, particularly as he now faces a significant time rehabilitating from surgery.

Axed Test opener Joe Burns is an almost certain casualty, while veteran batsman Matthew Wade could also miss despite still holding the vice-captaincy in Australia’s T20 squad. Former white-ball skipper Alex Carey has slipped out of the T20 XI and is another who could be squeezed out. Sources felt it unlikely on Wednesday that both Carey and Wade would make the mark, tipping it was likely to be one or the other.

Mitchell Marsh also remains around the mark of Australia’s T20 side but could also find himself dropped after being contracted last season. Ashton Agar has established himself as a white-ball regular and a scheduled Test tour in Asia against Pakistan early next year should help his case.

Marcus Stoinis missed out 12 months ago and, while he has re-established himself in the white-ball squads, he is in a battle to secure a contract. Specialist white-ball quick Kane Richardson will be helped by the fact there is a T20 World Cup on the horizon in India later this year. 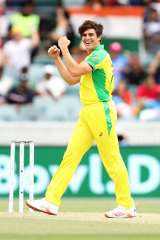 Sean Abbott may yet be squeezed out of the Cricket Australia contract list.Credit:Getty Images

Moises Henriques and Sean Abbott are both on the cusp of the Test XI but there may not be room for the NSW guns. Despite playing Australia’s most recent Test in January, opener Marcus Harris is another for whom there is unlikely to be room.

Paceman Jhye Richardson should keep his spot despite an injury-interrupted year, as should James Pattinson.

The Windies tour, which is supposed to feature both T20s and one-dayers, and the Bangladesh T20-only leg, are expected to be held back-to-back from late June in a bid to limit quarantine requirements for bubble-weary players.

While the players are set to have contractual stability for the next year, there remains frustration – and angst among some sources – over the leadership uncertainty at CA.

Interim chief executive Nick Hockley fronted a meeting with state association chief executives in South Australia this week. CA has started a strategic long-term plan, but whether he retains the key role remains a point of debate.

Hockley is seen by several industry figures to have done an excellent job in ensuring this summer’s schedule largely went ahead amid the fallout of the coronavirus pandemic, and planning is well underway for next summer’s Ashes campaign. But sources continue to question whether he has enough “big picture” acumen to be the bold leader many in the sport are craving. Hockley wants the job, but CA has engaged an outside recruitment firm to source other potential applicants.

NSW chairman John Knox and Queensland counterpart Chris Simpson continue to gun for CA chairman Earl Eddings for not having a succession plan and over his intention to secure a second term – something even Sir Donald Bradman was not even granted. But sources from other states on Wednesday maintain Knox and Simpson have much work to do if they are to secure the numbers to remove him. Four of the six states are needed to remove Eddings, who is calling for stability.

Those opposing Knox claim he has intentions to join the CA board and become chairman but those close to Knox say that is not the case. Knox’s move on Eddings was a private talking point among NSW club delegates at a meeting on Monday.

There has also been state frustration at how long it has taken for Queensland’s nominated candidate Greg Rowell to take his seat on the board. Rowell’s position was a point of discussion among key figures at the Sheffield Shield final in Brisbane last weekend, and it has since emerged he is likely to meet with CA’s board nominations committee next week.