Having got off the mark on their tour of Australia, India have received another boost ahead of the Twenty20 and Test series with the man who has helped Virat Kohli fine-tune his batting for years finally released from quarantine in Sydney after 24 days.

D Raghavendra, the throwdown expert credited by Kohli and India coach Ravi Shastri as an unsung hero for improving the team’s batting against fast bowling in the past decade, had been in a Sydney hotel room since arriving on a commercial flight from the subcontinent on November 9. 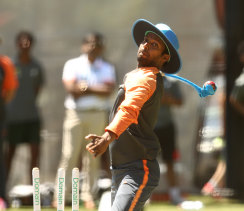 Raghavendra wasn’t the first or only member of a cricket squad or support staff to have to quarantine upon entering Australia for the summer but his 24 days were more than most.

One person who did serve longer was Australia coach Justin Langer, who spent 14 days at the new hotel at Adelaide Oval after returning from the limited-overs tour of England in September and then another fortnight in a Perth hotel because of his home state’s hard border.

Langer, however, was at least permitted to train with players while isolating in Adelaide.

Raghavendra hasn’t had that small luxury in three and a half weeks staring at four walls.

His release will be welcomed by the Indian side. He is not a player but is a rarity in world cricket in that he is a full-time touring practitioner of the “wanger”, a modified version of a tennis ball launcher for dogs that is used to fling cricket balls at batsmen in the training nets. His close association with Kohli and India's other leading batsmen has led to thousands of words being written about him in the Indian pres.

Australia and most other sides don’t have their own travelling throwdowns man but Raghavendra is a hugely valued member of the Indian staff for his ability to repeatedly hurl balls at more than 150kmh to batsmen, giving them crucial practice for facing fast bowling since he joined them on the road full-time in 2013.

He was due to begin training with the Indian batsmen over the weekend, when the travelling party will split up, with Kohli leading the T20 side in the second and third matches of the 20-over series against Australia at the SCG while other players take the field against Australia A in a red-ball warm-up game at Drummoyne Oval starting on Sunday.

Raghavendra may not be the last of the Indians to quarantine before joining the tour this summer. Kohli's white-ball vice-captain Rohit Sharma remains in India nursing a hamstring, with a decision to be made on whether he flies out on December 11.

Kohli last week indicated tension between the two senior batsmen over a lack of communication from Rohit concerning his availability for the tour.

If that's the case, they at least won't have to see each other in Australia this summer. If Rohit does arrive this month, he will still be in quarantine when Kohli departs following the first Test to be home for the birth of his first child.

Tags: he's, Kohli's, M, out, right hand
You may also like
Latest Posts

Hiddink backs under-fire Lampard to turn around horror run at Chelsea
Recent Posts
This website uses cookies to improve your user experience and to provide you with advertisements that are relevant to your interests. By continuing to browse the site you are agreeing to our use of cookies.Ok