Racing Victoria vets are set to review the medical history and training regime of import Involved after the horse was euthanised following a trackwork injury at Werribee.

The six-year-old could not be saved after he broke two sesamoid bones in a track gallop at the international quarantine centre.

The Australian Bloodstock purchase was not nominated for any of the big cups, but was set to join the stable of Ciaron Maher and David Eustace. 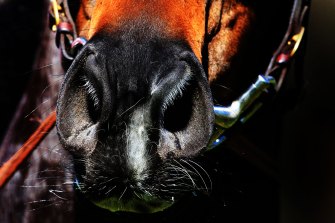 The death adds to a worrying number of horses injured in trackwork at Weribee over the past three years.Credit:Jenny Evans

"Racing Victoria can confirm that the Ciaron Maher and David Eustace-trained import Involved sustained an injury in trackwork at the TAB International Horse Centre last Friday [October 16]," Racing Victoria said in a statement to Racing.com.

"The horse was transported to the University of Melbourne Equine Centre in Werribee for assessment where it was determined that the horse had fractured two sesamoid bones in its left fore limb.

"Having considered the diagnosis and the prospects of a satisfactory recovery, the connections determined on veterinary advice that the appropriate course of action was for the horse to be humanely euthanised.

"As is standard practice, RV veterinary services are conducting a fatality review that will include a post-mortem and a review of the horse's medical history and training regime.

"The preliminary veterinary advice is that the Werribee track, which was rated a soft six on the day, was unlikely to have played any role in the horse's injury."

The death of Involved adds to a worrying number of horses injured in trackwork at Weribee over the past three years.

Red Galileo’s career ended after he pulled up lame following a trackwork injury on the eve of last year’s Cup, while Marmelo and Ispolini were also ruled out from competing in last year’s Melbourne Cup after CT scans at the University of Melbourne Equine Centre showed signs of soreness.

Red Verdon and Gold Mount were also ruled out of last year's Melbourne Cup after suffering injuries either in trackwork or in lead-up races.

Racing Victoria invested heavily in a CT scanner last year in an attempt to stop the spate of injuries at Werribee.

In 2018, Godolphin's main Cup hope, Hamada, had to be euthanised after suffering a broken hind in trackwork while others, such as The Pentagon (broke down), Duretto (stress fracture, leg), Emotionless (stress fracture, pelvis) and Red Verdon (sore), all had their campaigns ended.

Tags: after, euthanised, Horse, trackwo
You may also like
Latest Posts