Having talked themselves into how miserable it will be to tour Australia this summer, England have reinforced their defensive approach by picking a conservative squad.

However inadequate England’s batting is beyond Captain Colossus Joe Root, it’s the bowling where the tourists have missed the chance to add some flair and unpredictability. 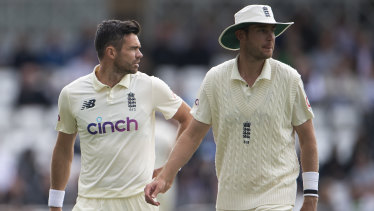 Jimmy Anderson and Stuart Broad are still top bowlers, but could struggle to play out the series.Credit:Getty

While the Dad’s Army of Jimmy Anderson (39) and Stuart Broad (35) will do well to manage five Tests between them opening the bowling, England have left one of their fastest fit bowlers at home.

The injury absences of game changers Jofra Archer and Ben Stokes are great losses. In their wake England could have chosen Saqib Mahmood, 25, as an X-factor. Powerfully built, Saqib has been clocked at 145km/h.

The world saw him in action mid-year when England was forced to pick an entirely new team for their one-day series against Pakistan after the regular squad was quarantined because of COVID-19 exposure.

Mahmood took the new ball in the first one-day match, claiming Imam-ul-Haq and Babar Azam in three balls to finish with 4-42. He was named player of the series after England claimed a remarkable 3-0 victory.

In seven one-day matches for England over the past 18 months he has 14 wickets at an average of less than 20.

Mahmood is likely to be a member of the England Lions second XI which will also tour Australia this summer and has been signed by Sydney Thunder in the BBL along with prolific England exile Alex Hales. At least Mahmood will be in the country should England decide they need him.

With Olly Stone also ruled out through back stress fractures, England have only one genuine pace bowler in their squad, Mark Wood, who is 31 and has a modest Test bowling average of 33. With 21 Tests in six years, he has missed more matches than he has played because of injuries.

The one rookie Ashes tourist who does look like he can bring something to the table is reformed bad boy Ollie Robinson (27) a strong seamer who generates good bounce.

Robinson is probably best remembered from last summer for his suspension after tweets from his teenage years made him a lightning rod for all that has been bad about diversity in English cricket.

Following his debut in June, Robinson took 28 wickets in five Tests at an average under 20.

Described as a “chirpy” leg spinner, 24-year-old Matt Parkinson is in his formative years as a slow bowler. He has already had outings with the England one-day and T20 teams, where concerns were raised about his lack of pace through the air, but he is a prodigious turner of the ball.

Parkinson already has 102 wickets at an average of 23 from 32 first class matches.

This is vastly superior to the most recent England leg spinners to play Test cricket in Australia. Mason Crane has 119 wickets from 48 matches at 41 and Scott Borthwick 220 wickets at 39 in 182 games.

The two finger spinners selected by England, left-armer Jack Leach and right-armer Dom Bess, have been chosen for their control rather than ability to get anyone out. They can consider themselves as lucky as some of England’s batsmen to be on tour after neither played a Test during the recent England summer.

For the most part England picked a bunch of seamers in friendly bowling conditions during their summer and Root, a useful off-spinner, pitched in when required. That is unlikely to suffice in Australia.

As for the batting, Root is in rarefied air given the year he has spent at the crease. He has done a remarkable job carrying his mediocre mates, scoring 1455 runs at 66 with six centuries and a top score of 228.

Given there are three Ashes Tests scheduled this year before the Sydney and Perth Tests in January, Root may yet break the record for most Tests in a calendar year set by former Pakistan captain Mohammad Yousuf with 1788 in 2006. 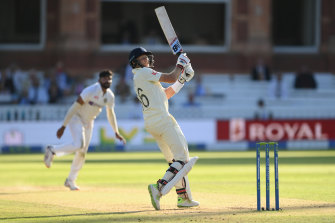 Joe Root is the England batter that Australia needs to fear.Credit:Getty

As for the remainder of England’s batsmen, they have been the cricket equivalent of deck chairs on the Titanic.

The best England Test batting average below Root this year is Dawid Malan. The 34-year-old was recalled for the last two Tests against India and averaged 35, an improvement on his career average of 29 from 17 Tests. The only other batsman to average 30 was opener Rory Burns, who has a technique which should not be exposed to children. Burns’ career average is just 32.

Every other batsman averaged below 30 in 2021, hardly encouraging given England have won just one Ashes series in Australia since 1987.