India have battled their way back into the match

Just after lunch on day three, a plane flew over Headingley with a simple message: “SACK THE ECB & SAVE TEST CRICKET.” It was peculiar for a few reasons, beyond the motivation to put resources towards such a thing.

The stands were full of just under 17,000 fans. England were in the ascendancy, with the only question being whether they would need a fifth day to confirm a series-levelling victory in this third match of five. As India began their second innings resistance against England, Test cricket seemed in no danger at all.

By the end of play, however, only one of those remained true. With the bars shut at 4:40pm, fans ventured out into the streets of Headingley, and on to Leeds, to find more sauce. With India reaching 215 for two, now just 139 behind, any plans to be elsewhere on Sunday should probably be canned. And with Cheteshwar Pujara walking off to the acclaim of those that remained after, extolling the virtues of the grind, unbeaten 91 off 180 balls, while Virat Kohli ruefully shook his head at the early close, 45* to his name, rarely has Test cricket in this country been in a better place than right now.

England should still win, but they should have done a lot of things over the last few years that they have not. And while India’s odds remain long, guessing what comes next feels like a waste. Just let the next 48 hours happen.

The morning feels like a different match entirely. The hosts picked up their first innings on 423 for eight and dropped it off pretty soon after. The overnight lead of 345 big enough to see any additions from Craig Overton (32) and Ollie Robinson as a bonus. That only nine were added in 3.2 overs wasn’t necessarily something to deride, though Robinson’s step back and heave, losing his off-stump to Jasprit Bumrah (two for 59) needn’t have been so cavalier. Little did they know as they walked off 432 all out that this would be the end of the one-way traffic of the last two days.

The pitch had got better for batting. In fact, maybe it was good all along. The majority of India’s 78 all out took place in favourable morning conditions, but even that seemed absent on Thursday. And Friday’s did not seem to promoted movement through the air for James Anderson or Ollie Robinson at the start of India’s second innings. A few edges dropped short of the slips, but nothing more, the strikes on the pad not convincing enough for believable appeals.

Tedium was exactly what India needed given all the excitement in the match had come at their expense. As lunch approached, the enthusiasm was being sapped effectively, leaving the Western Terrace to focus on their drinking.

However, at the end of the 19th over, Jonny Bairstow raised the noise levels and interest in infield matters with a stunning catch to his left to remove Rahul. Overton, the best of bowler on show, drew an edge that was arrowing towards Joe Root’s right at first slip. Bairstow, however, standing that little bit closer to the stumps at second, instinctively stuck out a paw, grabbing the ball in the meat of his left hand. 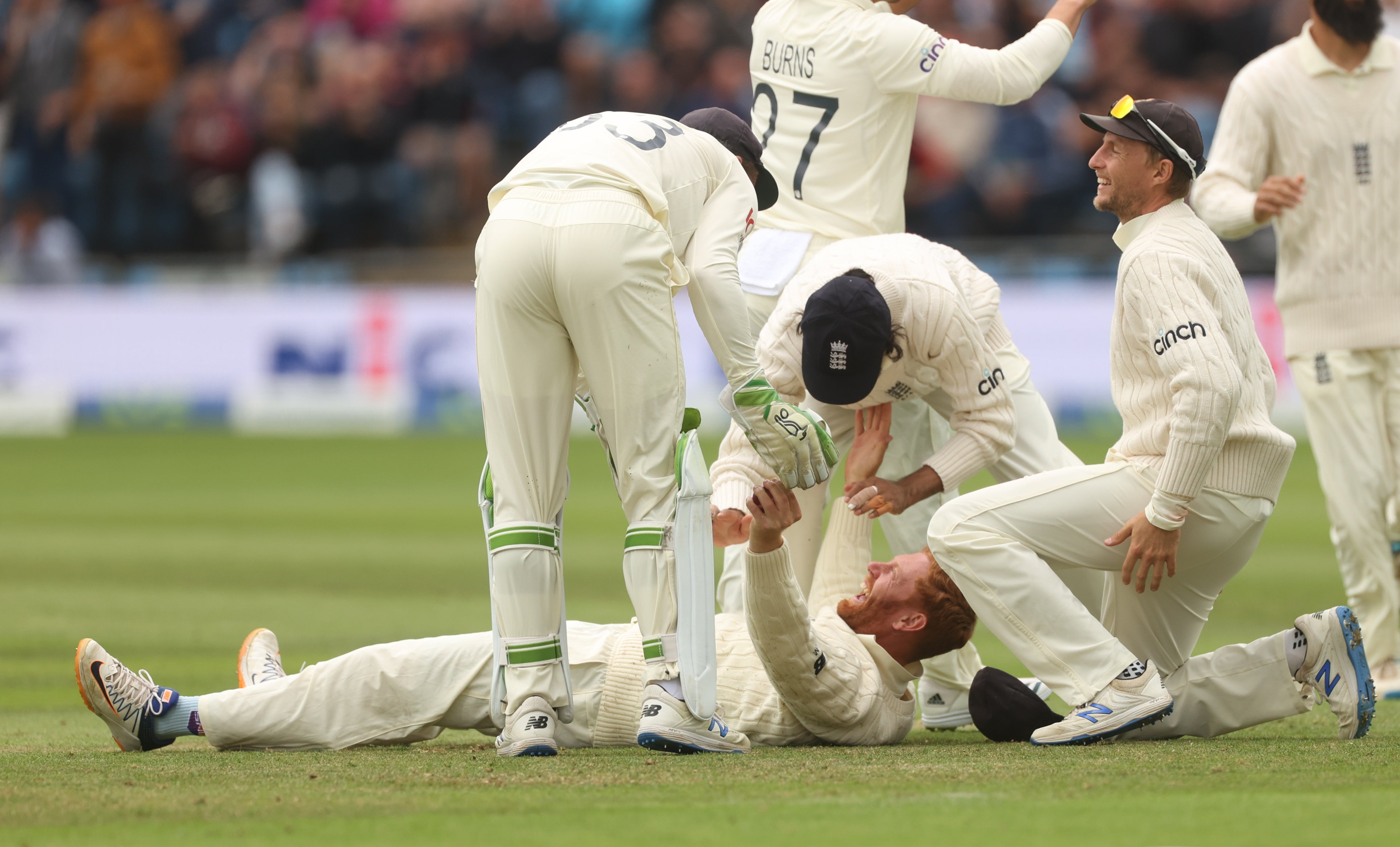 The usual followed: the pile-on, the immediate OOOOOOH from the crowds, the endless replays followed by more subdued but equally impressed OOOOOOHs. Unfortunately for England, they had to lunch on that feeling. The loss of a wicket so close to 1pm meant a 40-minute break. When they returned to the field at 1:40pm, the moment was long gone. And Pujara had arrived.

No one does subdued quite like Pujara, which in a format where batters are encouraged to calm things down, is a real gift. The thing is, he hadn’t done so in a while. Though is 45 off 206 deliveries was exactly that, it was not a deliberate subjugation of the world around him.

It was very much the innings of a man trying to work out if he could still do it. “It” being stopping others from doing. Turns out, he can. And still damn well considering how crisply he was striking the ball for runs, not just in defence. That he led a partnership of 82 with Rohit Sharma tells the tale of his stroke play: not rushed, but consistent, even when bus-wheeling into the leg side, whether down to fine leg or whipping yorker-length deliveries through square leg. The half-century, his first of the series and first in 13 innings, still came from a sedate 91 deliveries, but featured nine fours – the equal most across 30 fifties in this format.

While he motored on to finish with nine remaining for a 19th Test hundred within reach on day four – a first since June 2019 – Rohit sat in the dressing room watching on, feeling like he should be out there and probably celebrating an eighth of his own. Had Richard Kettleborough not given the benefit to Robinson on an appeal for LBW, the review and subsequent umpire’s call on the projected impact into leg stump will have been good news.

Instead, he was done for 59 – a second fifty of the series that looked like being so much more. England, though, will feel he had taken his luck far enough. On 39, they botched a call for a review when Root signalled for the television replays just as the DRS timer had run down to zero. A few seconds later, head coach Chris Silverwood walked out to the balcony and raised his finger to let his players know they had missed one which would have given them a boost of 73 for two. For once in this series, Root’s timing was off.

It speaks of Kohli’s series that his entry to the fray was treated a bit like that scene in Jurassic Park when the goat comes out of the floor in a cage, awaiting the T-Rex. At the time, the apex predator had still not come out after tea. But six overs after the restart, James Anderson had the ball from the Rugby End, Kohli was in his stance and here, so we thought, was the game.

Alas, Anderson was hooked after two overs were treated disdainfully by the India captain, especially the first which went for 12, with two crisp fours by Kohli through square leg and cover. A shock to the system no doubt considering Anderson’s entire first innings spell of eight overs went for just six.

Kohli will resume on 45 on Saturday, by which time he will have probably forgotten the ball from Root that beat him through the gate but passed just over middle-and-leg. The deficit is only 139, the pitch playing no tricks and still batting to come. India aren’t in the best position, but it is no longer a forlorn one.

Indeed it was two years ago that a side were rolled for double figures and did not end up losing the match. And though neither team has a Ben Stokes, or a Tim Paine to lose his nerve, England will spy the unexpected over the horizon.

It is why they decided not to take the second new ball at the end of play with light not good enough to put it in the hands of their quicks. They lost at Lord’s trying to push too hard and must ensure they do not panic and do the same here. India, meanwhile, will be all too aware how quickly their opponents can lose their nerve.