India booked a place in the Twenty20 World Cup semi-finals after surviving a late scare from New Zealand in a result which could have significant ramifications on the women's game.

After disposing of Australia on opening night, the Indians are the first team through to the final four after defeating the gallant White Ferns by three runs at the Junction Oval in one of the games of the tournament. 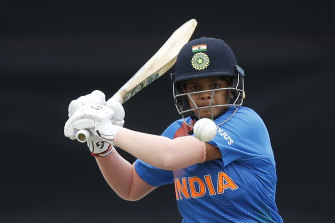 Their multi-pronged spin attack has flourished on the lower and slower pitches they have encountered at some of the smaller venues in Australia. Whether they will find conditions as helpful at the SCG and MCG is not known but, unlike the host nation, they know they will be there.

New Zealand now face the daunting prospect of having to defeat Australia in their final group game on Monday in order to claim the second semi-final berth in the group. They have already started the mind games with their trans-Tasman rivals despite still needing to defeat Bangladesh on Saturday.

"It's effectively a quarter-final for us. We've got nothing to lose," New Zealand wicketkeeper Katey Martin said. "All the pressure is on Australia. It's a home World Cup."

After scrounging their way to 133, the Indians appeared on course for a comfortable win but there was a late twist when pint-sized spin wizard Poonam Yadav was hit for 18 runs from the penultimate over of the run chase.

The Kiwis needed four off the final ball to send the match into a super over after Amelia Kerr's scoop for a boundary from the second last delivery – but their only pace bowler in the side, Shikha Pandey, nailed the yorker.

As in the upset win over Australia, 16-year-old Shafali Verma was integral to her team's win, sparking India's innings with her dynamic hitting during the power play.

The opener made the most of the harder ball, crunching 46 off 34 balls, before the Kiwis turned the screws in the middle overs with spin.

Kerr was vital in New Zealand's fightback, claiming the big wicket of Verma in the 14th over.

She was to make an even more important contribution to the game, setting up a thrilling finish by landing some big blows in the closing overs.

"She had a great day today, changed the momentum with her bowling," Martin said.

"She's a real star for us, and we'll be looking for her to continue that form in the tournament."

Tags: first, India, team, through, to, Wo
You may also like
Latest Posts