Time is running out for Shared Ambition to make it into next month's Melbourne Cup field, with the Chris Waller-trained stayer requiring a win in Saturday's Moonee Valley Gold Cup and a one kilogram penalty to improve his chances of a start.

The five-year-old gelding has the credentials but has not been able to win a race over 2400 metres or further to pass the first ballot clause of the Cup. 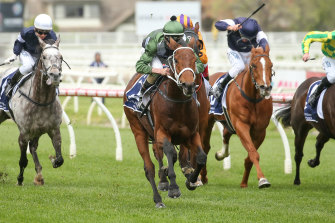 Time is running out for Shared Ambition to make it into the Melbourne Cup.Credit:Racing Photos

His form includes a fifth in the Bart Cummings and a second in the 2000m Kingston Town but a win and a one kilogram penalty would see him placed about 35th in the order of entry on Monday, ahead of the likes of Ashrun and Le Don De Vie.

However, a loss would leave him with next Saturday's Lexus Stakes as probably his final opportunity to gain a Melbourne Cup berth. Others chasing a Cup spot include Levendi, Sound and Gallic Chieftain. Etah James has already locked away a Cup start if he wants it.

Saturday's Vase, over the Cox Plate trip of 2040m, will prove one of the key lead-ups to this year's Derby, headed by Cherry Tortoni and Danny O'Brien's Young Werther.

The latter is expected to start favourite on Saturday after an unlucky second behind Khoekhoe, who also runs in the Vase. But Cherry Tortoni is more than capable of winning, having run second to Glenfiddich at the track in the Stutt Stakes before competing in a fast-run race in Sydney.

Johnny Get Angry could be the blowout chance for AFL premiership coach Denis Pagan, whose galloper looks likely to enjoy the Derby trip.

It takes a good horse to win a Crystal Mile, with Turn Me Loose, The United Stakes and Lucky Hussler among recent winners of the race. 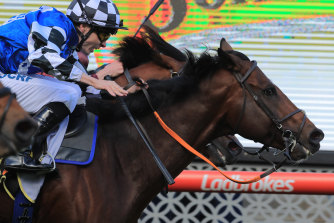 So it's no surprise to see a hot field for Saturday's edition, with the likes of Homesman, Kings Will Dream and last year's winner Chief Ironside in the field.

But Chris Waller's import Olmedo shapes as the X-factor. A horse with untapped ability, he will make his Australian debut on Saturday having already got a group 1 French Guineas win to his name. Bookmakers are holding him safe at $5.50, with Homesman the $4.20 top elect.

Peltzer and Prime Star are expected to fight for favouritism in Saturday's $1 million Bondi Stakes at Randwick.

A consolation prize for those arguably below the class of a Caulfield Guineas, the 1600m race for three-year-olds, Peltzer holds favouritism at $2.60 from Prime Star at $3.60 in what appears a two-horse race.

Tags: bid, Cup:, Inside, lin, on, running:
You may also like
Latest Posts