Sylvia’s Mother will be taking winning form from Melbourne to Sydney on Saturday in an attempt to claim the group 1 Coolmore Classic.

The lightly raced Snitzel mare has won seven of 11 in her career, including back-to-back wins at group-3 level in Melbourne. 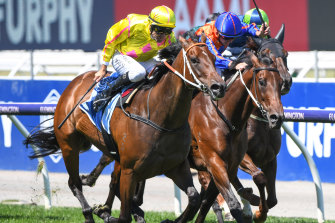 Sylvia’s Mother takes out the Frances Tressady Stakes at Flemington at her last start.Credit:AAP

The John Thompson-trained mare, Sweet Deal, shapes as her main danger, according to the bookmakers, after running second in the group 2 Guy Walter Stakes last start.

Godolphin mare Pohutukawa, who ran third in that race, is also well fancied.

Group 1 fillies Funstar and Probabeel are set to clash again at Rosehill on Saturday following their thrilling finish to last month’s Surround Stakes.

Probabeel got the better of her nemesis on that occasion, producing a massive run from the back half of the field to win the 1400-metre group 1.

However, Funstar will start favourite in Saturday’s 1500-metre race with the added fitness of her first-up run.

She has twice beaten Probabeel, in the Tea Rose and Flight Stakes in the spring.

Caulfield Cup favourite Master Of Wine has been established as a $2.45 favourite to continue her winning streak in the TAB Sky High Stakes on Saturday. 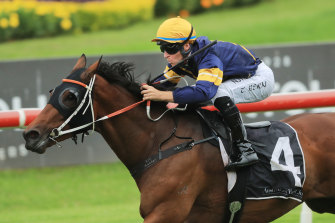 Master Of Wine is a super stayer, according to leading sectionals analyst Vince Accardi.Credit:Getty Images

The boom horse has won her last three races, including a comfortable 3.5-length win over 1400 metres last start.

Ebor Handicap winner Mustajeer is also well held in the market at $3.70 after winning at Rosehill last month.

Secret Blaze will be looking to frank the Blamey Stakes form at Caulfield on Saturday in the Mornington Cup prelude.

The son of Sizzling is en route to the Mornington Cup, which carries a direct entry into the Caulfield Cup for the winner.

Also racing on the All-Star Mile undercard is Admiral’s Joker, who ran third in the Blamey.

The seven-year-old gelding, who is first emergency for the $5 million race, is rated at $1.85 to win the listed Neds Anniversary Vase.

Il Paradiso was removed from Melbourne Cup markets this week after the Chris Waller-trained import sustained a mild tendon strain to its near fore leg.

Waller informed stewards this week that the former Coolmore-owned stayer would be spelled during both the autumn and spring.

Il Paradiso finished third at his Australian debut in last year’s Melbourne Cup and has not raced since.

Tags: FORM, Inside, Melbourne, running:
You may also like
Latest Posts